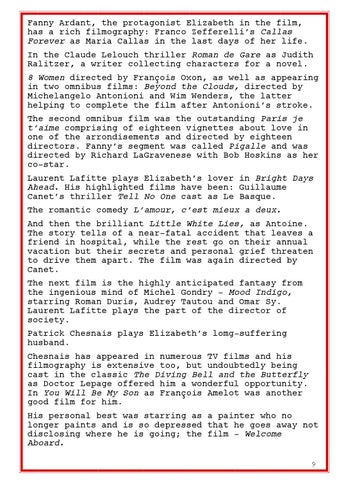 Fanny Ardant, the protagonist Elizabeth in the film, has a rich filmography: Franco Zefferelli’s Callas Forever as Maria Callas in the last days of her life. In the Claude Lelouch thriller Roman de Gare as Judith Ralitzer, a writer collecting characters for a novel. 8 Women directed by François Oxon, as well as appearing in two omnibus films: Beyond the Clouds, directed by Michelangelo Antonioni and Wim Wenders, the latter helping to complete the film after Antonioni’s stroke. The second omnibus film was the outstanding Paris je t’aime comprising of eighteen vignettes about love in one of the arrondisements and directed by eighteen directors. Fanny’s segment was called Pigalle and was directed by Richard LaGravenese with Bob Hoskins as her co-star. Laurent Lafitte plays Elizabeth’s lover in Bright Days Ahead. His highlighted films have been: Guillaume Canet’s thriller Tell No One cast as Le Basque. The romantic comedy L’amour, c’est mieux a deux. And then the brilliant Little White Lies, as Antoine. The story tells of a near-fatal accident that leaves a friend in hospital, while the rest go on their annual vacation but their secrets and personal grief threaten to drive them apart. The film was again directed by Canet. The next film is the highly anticipated fantasy from the ingenious mind of Michel Gondry - Mood Indigo, starring Roman Duris, Audrey Tautou and Omar Sy. Laurent Lafitte plays the part of the director of society. Patrick Chesnais plays Elizabeth’s lomg-suffering husband. Chesnais has appeared in numerous TV films and his filmography is extensive too, but undoubtedly being cast in the classic The Diving Bell and the Butterfly as Doctor Lepage offered him a wonderful opportunity. In You Will Be My Son as François Amelot was another good film for him. His personal best was starring as a painter who no longer paints and is so depressed that he goes away not disclosing where he is going; the film – Welcome Aboard. 9