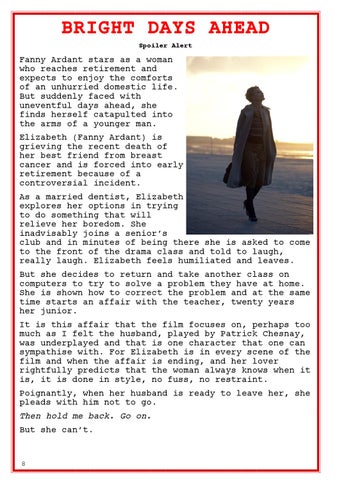 Fanny Ardant stars as a woman who reaches retirement and expects to enjoy the comforts of an unhurried domestic life. But suddenly faced with uneventful days ahead, she finds herself catapulted into the arms of a younger man. Elizabeth (Fanny Ardant) is grieving the recent death of her best friend from breast cancer and is forced into early retirement because of a controversial incident. As a married dentist, Elizabeth explores her options in trying to do something that will relieve her boredom. She inadvisably joins a seniorâ&#x20AC;&#x2122;s club and in minutes of being there she is asked to come to the front of the drama class and told to laugh, really laugh. Elizabeth feels humiliated and leaves. But she decides to return and take another class on computers to try to solve a problem they have at home. She is shown how to correct the problem and at the same time starts an affair with the teacher, twenty years her junior. It is this affair that the film focuses on, perhaps too much as I felt the husband, played by Patrick Chesnay, was underplayed and that is one character that one can sympathise with. For Elizabeth is in every scene of the film and when the affair is ending, and her lover rightfully predicts that the woman always knows when it is, it is done in style, no fuss, no restraint. Poignantly, when her husband is ready to leave her, she pleads with him not to go. Then hold me back. Go on. But she canâ&#x20AC;&#x2122;t.