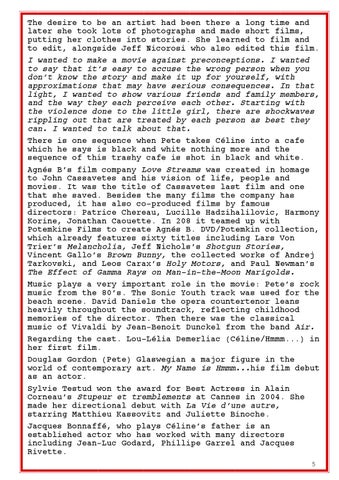 The desire to be an artist had been there a long time and later she took lots of photographs and made short films, putting her clothes into stories. She learned to film and to edit, alongside Jeff Nicorosi who also edited this film. I wanted to make a movie against preconceptions. I wanted to say that it’s easy to accuse the wrong person when you don’t know the story and make it up for yourself, with approximations that may have serious consequences. In that light, I wanted to show various friends and family members, and the way they each perceive each other. Starting with the violence done to the little girl, there are shockwaves rippling out that are treated by each person as best they can. I wanted to talk about that. There is one sequence when Pete takes Céline into a cafe which he says is black and white nothing more and the sequence of this trashy cafe is shot in black and white. Agnés B’s film company Love Streams was created in homage to John Cassavetes and his vision of life, people and movies. It was the title of Cassavetes last film and one that she saved. Besides the many films the company has produced, it has also co-produced films by famous directors: Patrice Chereau, Lucille Hadzihalilovic, Harmony Korine, Jonathan Caouette. In 208 it teamed up with Potemkine Films to create Agnés B. DVD/Potemkin collection, which already features sixty titles including Lars Von Trier’s Melancholia, Jeff Nichols’s Shotgun Stories, Vincent Gallo’s Brown Bunny, the collected works of Andrej Tarkovski, and Leos Carax’s Holy Motors, and Paul Newman’s The Effect of Gamma Rays on Man-in-the-Moon Marigolds. Music plays a very important role in the movie: Pete’s rock music from the 80’s. The Sonic Youth track was used for the beach scene. David Daniels the opera countertenor leans heavily throughout the soundtrack, reflecting childhood memories of the director. Then there was the classical music of Vivaldi by Jean-Benoit Dunckel from the band Air. Regarding the cast. Lou-Lélia Demerliac (Céline/Hmmm...) in her first film. Douglas Gordon (Pete) Glaswegian a major figure in the world of contemporary art. My Name is Hmmm...his film debut as an actor. Sylvie Testud won the award for Best Actress in Alain Corneau’s Stupeur et tremblements at Cannes in 2004. She made her directional debut with La Vie d’une autre, starring Matthieu Kassovitz and Juliette Binoche. Jacques Bonnaffé, who plays Céline’s father is an established actor who has worked with many directors including Jean-Luc Godard, Phillipe Garrel and Jacques Rivette. 5