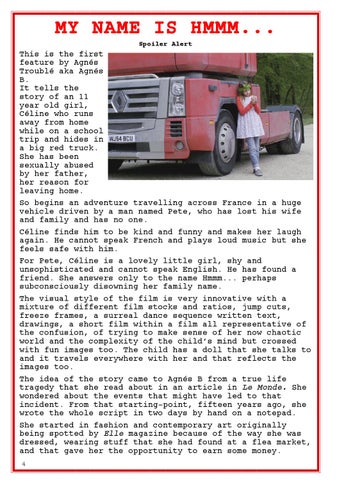 MY NAME IS HMMM... Spoiler Alert

This is the first feature by Agnés Troublé aka Agnés B. It tells the story of an 11 year old girl, Céline who runs away from home while on a school trip and hides in a big red truck. She has been sexually abused by her father, her reason for leaving home. So begins an adventure travelling across France in a huge vehicle driven by a man named Pete, who has lost his wife and family and has no one. Céline finds him to be kind and funny and makes her laugh again. He cannot speak French and plays loud music but she feels safe with him. For Pete, Céline is a lovely little girl, shy and unsophisticated and cannot speak English. He has found a friend. She answers only to the name Hmmm... perhaps subconsciously disowning her family name. The visual style of the film is very innovative with a mixture of different film stocks and ratios, jump cuts, freeze frames, a surreal dance sequence written text, drawings, a short film within a film all representative of the confusion, of trying to make sense of her now chaotic world and the complexity of the child’s mind but crossed with fun images too. The child has a doll that she talks to and it travels everywhere with her and that reflects the images too. The idea of the story came to Agnés B from a true life tragedy that she read about in an article in Le Monde. She wondered about the events that might have led to that incident. From that starting-point, fifteen years ago, she wrote the whole script in two days by hand on a notepad. She started in fashion and contemporary art originally being spotted by Elle magazine because of the way she was dressed, wearing stuff that she had found at a flea market, and that gave her the opportunity to earn some money. 4