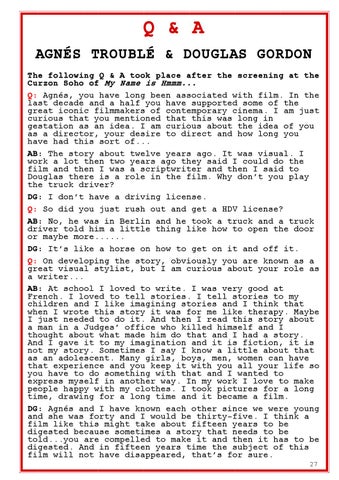 Q & A AGNÉS TROUBLÉ & DOUGLAS GORDON The following Q & A took place after the screening at the Curzon Soho of My Name is Hmmm... Q: Agnés, you have long been associated with film. In the last decade and a half you have supported some of the great iconic filmmakers of contemporary cinema. I am just curious that you mentioned that this was long in gestation as an idea. I am curious about the idea of you as a director, your desire to direct and how long you have had this sort of... AB: The story about twelve years ago. It was visual. I work a lot then two years ago they said I could do the film and then I was a scriptwriter and then I said to Douglas there is a role in the film. Why don’t you play the truck driver? DG: I don’t have a driving license. Q: So did you just rush out and get a HDV license? AB: No, he was in Berlin and he took a truck and a truck driver told him a little thing like how to open the door or maybe more...... DG: It’s like a horse on how to get on it and off it. Q: On developing the story, obviously you are known as a great visual stylist, but I am curious about your role as a writer... AB: At school I loved to write. I was very good at French. I loved to tell stories. I tell stories to my children and I like imagining stories and I think that when I wrote this story it was for me like therapy. Maybe I just needed to do it. And then I read this story about a man in a Judges’ office who killed himself and I thought about what made him do that and I had a story. And I gave it to my imagination and it is fiction, it is not my story. Sometimes I say I know a little about that as an adolescent. Many girls, boys, men, women can have that experience and you keep it with you all your life so you have to do something with that and I wanted to express myself in another way. In my work I love to make people happy with my clothes. I took pictures for a long time, drawing for a long time and it became a film. DG: Agnés and I have known each other since we were young and she was forty and I would be thirty-five. I think a film like this might take about fifteen years to be digested because sometimes a story that needs to be told...you are compelled to make it and then it has to be digested. And in fifteen years time the subject of this film will not have disappeared, that’s for sure. 27