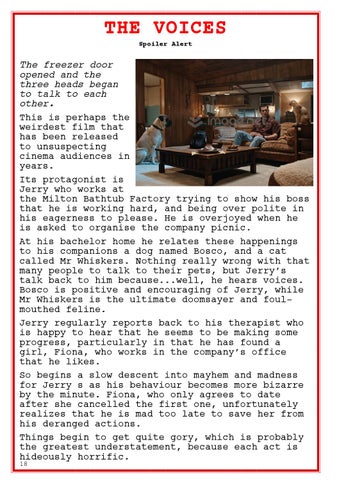 The freezer door opened and the three heads began to talk to each other. This is perhaps the weirdest film that has been released to unsuspecting cinema audiences in years. Its protagonist is Jerry who works at the Milton Bathtub Factory trying to show his boss that he is working hard, and being over polite in his eagerness to please. He is overjoyed when he is asked to organise the company picnic. At his bachelor home he relates these happenings to his companions a dog named Bosco, and a cat called Mr Whiskers. Nothing really wrong with that many people to talk to their pets, but Jerryâ&#x20AC;&#x2122;s talk back to him because...well, he hears voices. Bosco is positive and encouraging of Jerry, while Mr Whiskers is the ultimate doomsayer and foulmouthed feline. Jerry regularly reports back to his therapist who is happy to hear that he seems to be making some progress, particularly in that he has found a girl, Fiona, who works in the companyâ&#x20AC;&#x2122;s office that he likes. So begins a slow descent into mayhem and madness for Jerry s as his behaviour becomes more bizarre by the minute. Fiona, who only agrees to date after she cancelled the first one, unfortunately realizes that he is mad too late to save her from his deranged actions. Things begin to get quite gory, which is probably the greatest understatement, because each act is hideously horrific. 18