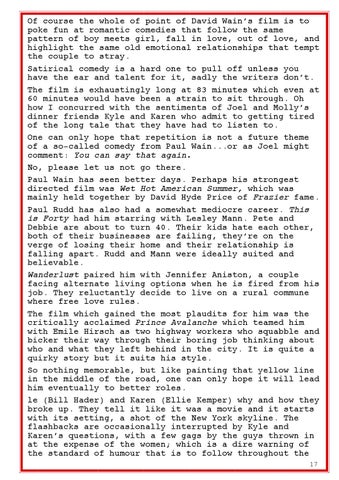 Of course the whole of point of David Wain’s film is to poke fun at romantic comedies that follow the same pattern of boy meets girl, fall in love, out of love, and highlight the same old emotional relationships that tempt the couple to stray. Satirical comedy is a hard one to pull off unless you have the ear and talent for it, sadly the writers don’t. The film is exhaustingly long at 83 minutes which even at 60 minutes would have been a strain to sit through. Oh how I concurred with the sentiments of Joel and Molly’s dinner friends Kyle and Karen who admit to getting tired of the long tale that they have had to listen to. One can only hope that repetition is not a future theme of a so-called comedy from Paul Wain...or as Joel might comment: You can say that again. No, please let us not go there. Paul Wain has seen better days. Perhaps his strongest directed film was Wet Hot American Summer, which was mainly held together by David Hyde Price of Frazier fame. Paul Rudd has also had a somewhat mediocre career. This is Forty had him starring with Lesley Mann. Pete and Debbie are about to turn 40. Their kids hate each other, both of their businesses are failing, they‘re on the verge of losing their home and their relationship is falling apart. Rudd and Mann were ideally suited and believable. Wanderlust paired him with Jennifer Aniston, a couple facing alternate living options when he is fired from his job. They reluctantly decide to live on a rural commune where free love rules. The film which gained the most plaudits for him was the critically acclaimed Prince Avalanche which teamed him with Emile Hirsch as two highway workers who squabble and bicker their way through their boring job thinking about who and what they left behind in the city. It is quite a quirky story but it suits his style. So nothing memorable, but like painting that yellow line in the middle of the road, one can only hope it will lead him eventually to better roles. le (Bill Hader) and Karen (Ellie Kemper) why and how they broke up. They tell it like it was a movie and it starts with its setting, a shot of the New York skyline. The flashbacks are occasionally interrupted by Kyle and Karen’s questions, with a few gags by the guys thrown in at the expense of the women; which is a dire warning of the standard of humour that is to follow throughout the 17