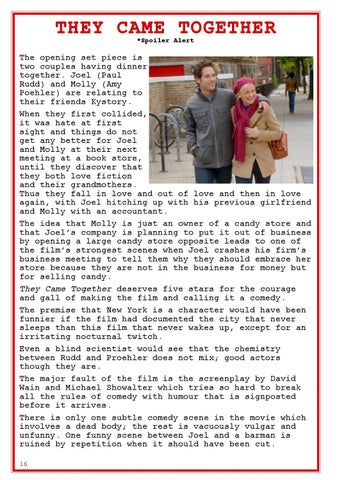 THEY CAME TOGETHER *Spoiler Alert

The opening set piece is two couples having dinner together. Joel (Paul Rudd) and Molly (Amy Poehler) are relating to their friends Kystory. When they first collided, it was hate at first sight and things do not get any better for Joel and Molly at their next meeting at a book store, until they discover that they both love fiction and their grandmothers. Thus they fall in love and out of love and then in love again, with Joel hitching up with his previous girlfriend and Molly with an accountant. The idea that Molly is just an owner of a candy store and that Joel’s company is planning to put it out of business by opening a large candy store opposite leads to one of the film’s strongest scenes when Joel crashes his firm’s business meeting to tell them why they should embrace her store because they are not in the business for money but for selling candy. They Came Together deserves five stars for the courage and gall of making the film and calling it a comedy. The premise that New York is a character would have been funnier if the film had documented the city that never sleeps than this film that never wakes up, except for an irritating nocturnal twitch. Even a blind scientist would see that the chemistry between Rudd and Proehler does not mix; good actors though they are. The major fault of the film is the screenplay by David Wain and Michael Showalter which tries so hard to break all the rules of comedy with humour that is signposted before it arrives. There is only one subtle comedy scene in the movie which involves a dead body; the rest is vacuously vulgar and unfunny. One funny scene between Joel and a barman is ruined by repetition when it should have been cut. 16