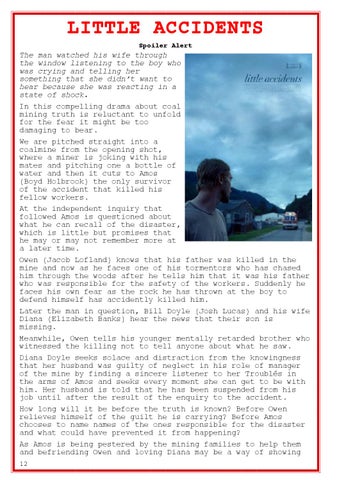 The man watched his wife through the window listening to the boy who was crying and telling her something that she didnâ&#x20AC;&#x2122;t want to hear because she was reacting in a state of shock. In this compelling drama about coal mining truth is reluctant to unfold for the fear it might be too damaging to bear. We are pitched straight into a coalmine from the opening shot, where a miner is joking with his mates and pitching one a bottle of water and then it cuts to Amos (Boyd Holbrook) the only survivor of the accident that killed his fellow workers. At the independent inquiry that followed Amos is questioned about what he can recall of the disaster, which is little but promises that he may or may not remember more at a later time. Owen (Jacob Lofland) knows that his father was killed in the mine and now as he faces one of his tormentors who has chased him through the woods after he tells him that it was his father who was responsible for the safety of the workers. Suddenly he faces his own fear as the rock he has thrown at the boy to defend himself has accidently killed him. Later the man in question, Bill Doyle (Josh Lucas) and his wife Diana (Elizabeth Banks) hear the news that their son is missing. Meanwhile, Owen tells his younger mentally retarded brother who witnessed the killing not to tell anyone about what he saw. Diana Doyle seeks solace and distraction from the knowingness that her husband was guilty of neglect in his role of manager of the mine by finding a sincere listener to her TroublĂŠs in the arms of Amos and seeks every moment she can get to be with him. Her husband is told that he has been suspended from his job until after the result of the enquiry to the accident. How long will it be before the truth is known? Before Owen relieves himself of the guilt he is carrying? Before Amos chooses to name names of the ones responsible for the disaster and what could have prevented it from happening? As Amos is being pestered by the mining families to help them and befriending Owen and loving Diana may be a way of showing 12