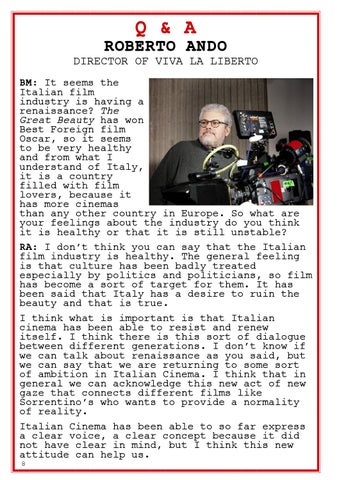 Q &amp; A ROBERTO ANDO DIRECTOR OF VIVA LA LIBERTO BM: It seems the Italian film industry is having a renaissance? The Great Beauty has won Best Foreign film Oscar, so it seems to be very healthy and from what I understand of Italy, it is a country filled with film lovers, because it has more cinemas than any other country in Europe. So what are your feelings about the industry do you think it is healthy or that it is still unstable? RA: I don’t think you can say that the Italian film industry is healthy. The general feeling is that culture has been badly treated especially by politics and politicians, so film has become a sort of target for them. It has been said that Italy has a desire to ruin the beauty and that is true. I think what is important is that Italian cinema has been able to resist and renew itself. I think there is this sort of dialogue between different generations. I don’t know if we can talk about renaissance as you said, but we can say that we are returning to some sort of ambition in Italian Cinema. I think that in general we can acknowledge this new act of new gaze that connects different films like Sorrentino’s who wants to provide a normality of reality. Italian Cinema has been able to so far express a clear voice, a clear concept because it did not have clear in mind, but I think this new attitude can help us. 8