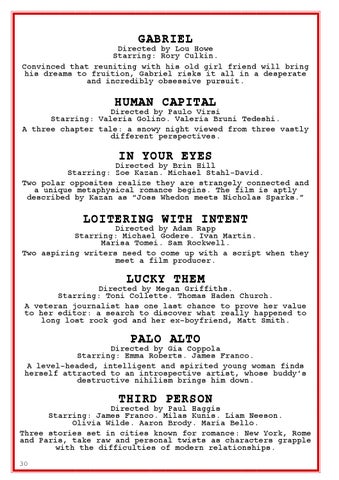 Directed by Lou Howe Starring: Rory Culkin. Convinced that reuniting with his old girl friend will bring his dreams to fruition, Gabriel risks it all in a desperate and incredibly obsessive pursuit.

Directed by Megan Griffiths. Starring: Toni Collette. Thomas Haden Church. A veteran journalist has one last chance to prove her value to her editor: a search to discover what really happened to long lost rock god and her ex-boyfriend, Matt Smith.

Directed by Gia Coppola Starring: Emma Roberts. James Franco. A level-headed, intelligent and spirited young woman finds herself attracted to an introspective artist, whose buddy’s destructive nihilism brings him down.