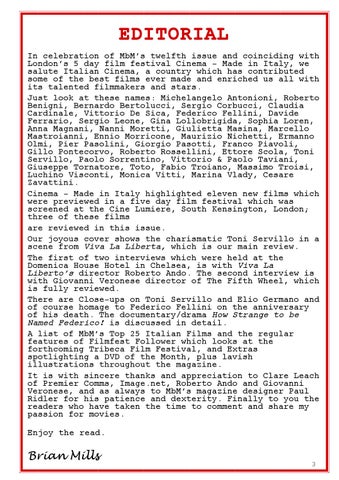 EDITORIAL In celebration of MbM’s twelfth issue and coinciding with London’s 5 day film festival Cinema – Made in Italy, we salute Italian Cinema, a country which has contributed some of the best films ever made and enriched us all with its talented filmmakers and stars. Just look at these names: Michelangelo Antonioni, Roberto Benigni, Bernardo Bertolucci, Sergio Corbucci, Claudia Cardinale, Vittorio De Sica, Federico Fellini, Davide Ferrario, Sergio Leone, Gina Lollobrigida, Sophia Loren, Anna Magnani, Nanni Moretti, Giulietta Masina, Marcello Mastroianni, Ennio Morricone, Maurizio Nichetti, Ermanno Olmi, Pier Pasolini, Giorgio Pasotti, Franco Piavoli, Gillo Pontecorvo, Roberto Rossellini, Ettore Scola, Toni Servillo, Paolo Sorrentino, Vittorio & Paolo Taviani, Giuseppe Tornatore, Toto, Fabio Troiano, Massimo Troisi, Luchino Visconti, Monica Vitti, Marina Vlady, Cesare Zavattini. Cinema – Made in Italy highlighted eleven new films which were previewed in a five day film festival which was screened at the Cine Lumiere, South Kensington, London; three of these films are reviewed in this issue. Our joyous cover shows the charismatic Toni Servillo in a scene from Viva La Liberta, which is our main review. The first of two interviews which were held at the Domenica House Hotel in Chelsea, is with Viva La Liberto’s director Roberto Ando. The second interview is with Giovanni Veronese director of The Fifth Wheel, which is fully reviewed. There are Close-ups on Toni Servillo and Elio Germano and of course homage to Federico Fellini on the anniversary of his death. The documentary/drama How Strange to be Named Federico! is discussed in detail. A list of MbM’s Top 25 Italian Films and the regular features of Filmfest Follower which looks at the forthcoming Tribeca Film Festival, and Extras spotlighting a DVD of the Month, plus lavish illustrations throughout the magazine. It is with sincere thanks and appreciation to Clare Leach of Premier Comms, Image.net, Roberto Ando and Giovanni Veronese, and as always to MbM’s magazine designer Paul Ridler for his patience and dexterity. Finally to you the readers who have taken the time to comment and share my passion for movies.