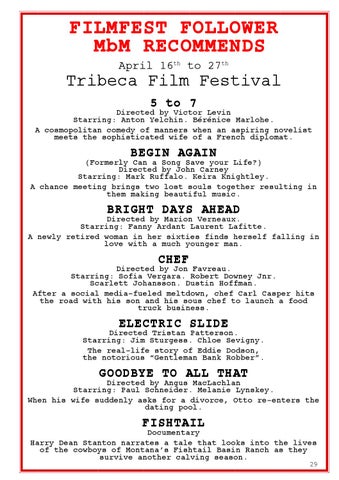 Directed by Victor Levin Starring: Anton Yelchin. Bérénice Marlohe. A cosmopolitan comedy of manners when an aspiring novelist meets the sophisticated wife of a French diplomat.

(Formerly Can a Song Save your Life?) Directed by John Carney Starring: Mark Ruffalo. Keira Knightley. A chance meeting brings two lost souls together resulting in them making beautiful music.

Directed by Marion Verneaux. Starring: Fanny Ardant Laurent Lafitte. A newly retired woman in her sixties finds herself falling in love with a much younger man.

GOODBYE TO ALL THAT

Documentary Harry Dean Stanton narrates a tale that looks into the lives of the cowboys of Montana’s Fishtail Basin Ranch as they survive another calving season. 29