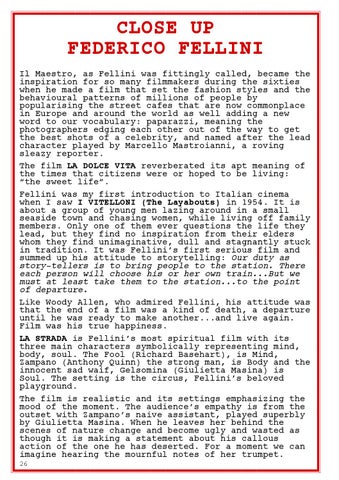 CLOSE UP FEDERICO FELLINI Il Maestro, as Fellini was fittingly called, became the inspiration for so many filmmakers during the sixties when he made a film that set the fashion styles and the behavioural patterns of millions of people by popularising the street cafes that are now commonplace in Europe and around the world as well adding a new word to our vocabulary: paparazzi, meaning the photographers edging each other out of the way to get the best shots of a celebrity, and named after the lead character played by Marcello Mastroianni, a roving sleazy reporter. The film LA DOLCE VITA reverberated its apt meaning of the times that citizens were or hoped to be living: “the sweet life”. Fellini was my first introduction to Italian cinema when I saw I VITELLONI (The Layabouts) in 1954. It is about a group of young men lazing around in a small seaside town and chasing women, while living off family members. Only one of them ever questions the life they lead, but they find no inspiration from their elders whom they find unimaginative, dull and stagnantly stuck in tradition. It was Fellini’s first serious film and summed up his attitude to storytelling: Our duty as story-tellers is to bring people to the station. There each person will choose his or her own train...But we must at least take them to the station...to the point of departure. Like Woody Allen, who admired Fellini, his attitude was that the end of a film was a kind of death, a departure until he was ready to make another...and live again. Film was his true happiness. LA STRADA is Fellini’s most spiritual film with its three main characters symbolically representing mind, body, soul. The Fool (Richard Basehart), is Mind, Zampano (Anthony Quinn) the strong man, is Body and the innocent sad waif, Gelsomina (Giulietta Masina) is Soul. The setting is the circus, Fellini’s beloved playground. The film is realistic and its settings emphasizing the mood of the moment. The audience’s empathy is from the outset with Zampano’s naive assistant, played superbly by Giulietta Masina. When he leaves her behind the scenes of nature change and become ugly and wasted as though it is making a statement about his callous action of the one he has deserted. For a moment we can imagine hearing the mournful notes of her trumpet. 26