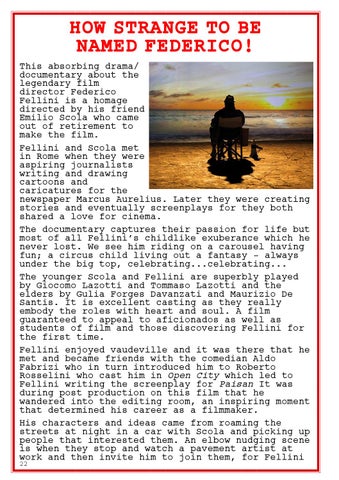 HOW STRANGE TO BE NAMED FEDERICO! This absorbing drama/ documentary about the legendary film director Federico Fellini is a homage directed by his friend Emilio Scola who came out of retirement to make the film. Fellini and Scola met in Rome when they were aspiring journalists writing and drawing cartoons and caricatures for the newspaper Marcus Aurelius. Later they were creating stories and eventually screenplays for they both shared a love for cinema. The documentary captures their passion for life but most of all Felliniâ&amp;#x20AC;&amp;#x2122;s childlike exuberance which he never lost. We see him riding on a carousel having fun; a circus child living out a fantasy â&amp;#x20AC;&amp;#x201C; always under the big top, celebrating...celebrating... The younger Scola and Fellini are superbly played by Giocomo Lazotti and Tommaso Lazotti and the elders by Gulia Forges Davanzati and Maurizio De Santis. It is excellent casting as they really embody the roles with heart and soul. A film guaranteed to appeal to aficionados as well as students of film and those discovering Fellini for the first time. Fellini enjoyed vaudeville and it was there that he met and became friends with the comedian Aldo Fabrizi who in turn introduced him to Roberto Rosselini who cast him in Open City which led to Fellini writing the screenplay for Paisan It was during post production on this film that he wandered into the editing room, an inspiring moment that determined his career as a filmmaker. His characters and ideas came from roaming the streets at night in a car with Scola and picking up people that interested them. An elbow nudging scene is when they stop and watch a pavement artist at work and then invite him to join them, for Fellini 22