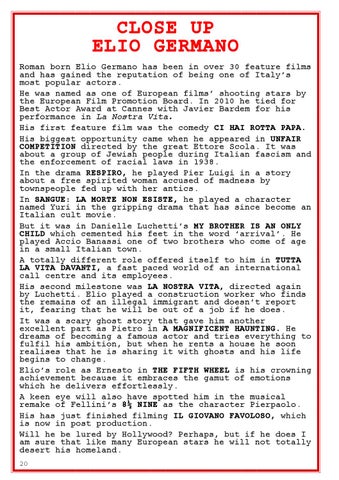 CLOSE UP ELIO GERMANO Roman born Elio Germano has been in over 30 feature films and has gained the reputation of being one of Italy’s most popular actors. He was named as one of European films’ shooting stars by the European Film Promotion Board. In 2010 he tied for Best Actor Award at Cannes with Javier Bardem for his performance in La Nostra Vita. His first feature film was the comedy CI HAI ROTTA PAPA. His biggest opportunity came when he appeared in UNFAIR COMPETITION directed by the great Ettore Scola. It was about a group of Jewish people during Italian fascism and the enforcement of racial laws in 1938. In the drama RESPIRO, he played Pier Luigi in a story about a free spirited woman accused of madness by townspeople fed up with her antics. In SANGUE: LA MORTE NON ESISTE, he played a character named Yuri in the gripping drama that has since become an Italian cult movie. But it was in Danielle Luchetti’s MY BROTHER IS AN ONLY CHILD which cemented his feet in the word ‘arrival’. He played Accio Banassi one of two brothers who come of age in a small Italian town. A totally different role offered itself to him in TUTTA LA VITA DAVANTI, a fast paced world of an international call centre and its employees. His second milestone was LA NOSTRA VITA, directed again by Luchetti. Elio played a construction worker who finds the remains of an illegal immigrant and doesn’t report it, fearing that he will be out of a job if he does. It was a scary ghost story that gave him another excellent part as Pietro in A MAGNIFICENT HAUNTING. He dreams of becoming a famous actor and tries everything to fulfil his ambition, but when he rents a house he soon realises that he is sharing it with ghosts and his life begins to change. Elio’s role as Ernesto in THE FIFTH WHEEL is his crowning achievement because it embraces the gamut of emotions which he delivers effortlessly. A keen eye will also have spotted him in the musical remake of Fellini’s 8½ NINE as the character Pierpaolo. His has just finished filming IL GIOVANO FAVOLOSO, which is now in post production. Will he be lured by Hollywood? Perhaps, but if he does I am sure that like many European stars he will not totally desert his homeland. 20