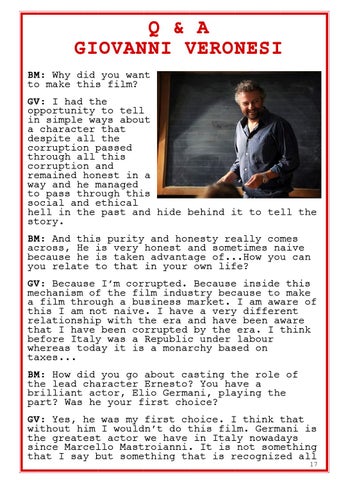 Q &amp; A GIOVANNI VERONESI BM: Why did you want to make this film? GV: I had the opportunity to tell in simple ways about a character that despite all the corruption passed through all this corruption and remained honest in a way and he managed to pass through this social and ethical hell in the past and hide behind it to tell the story. BM: And this purity and honesty really comes across, He is very honest and sometimes naive because he is taken advantage of...How you can you relate to that in your own life? GV: Because Iâ&amp;#x20AC;&amp;#x2122;m corrupted. Because inside this mechanism of the film industry because to make a film through a business market. I am aware of this I am not naive. I have a very different relationship with the era and have been aware that I have been corrupted by the era. I think before Italy was a Republic under labour whereas today it is a monarchy based on taxes... BM: How did you go about casting the role of the lead character Ernesto? You have a brilliant actor, Elio Germani, playing the part? Was he your first choice? GV: Yes, he was my first choice. I think that without him I wouldnâ&amp;#x20AC;&amp;#x2122;t do this film. Germani is the greatest actor we have in Italy nowadays since Marcello Mastroianni. It is not something that I say but something that is recognized all 17