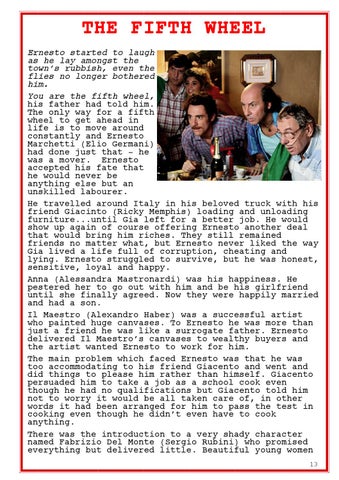 THE FIFTH WHEEL Ernesto started to laugh as he lay amongst the town’s rubbish, even the flies no longer bothered him. You are the fifth wheel, his father had told him. The only way for a fifth wheel to get ahead in life is to move around constantly and Ernesto Marchetti (Elio Germani) had done just that – he was a mover. Ernesto accepted his fate that he would never be anything else but an unskilled labourer. He travelled around Italy in his beloved truck with his friend Giacinto (Ricky Memphis) loading and unloading furniture...until Gia left for a better job. He would show up again of course offering Ernesto another deal that would bring him riches. They still remained friends no matter what, but Ernesto never liked the way Gia lived a life full of corruption, cheating and lying. Ernesto struggled to survive, but he was honest, sensitive, loyal and happy. Anna (Alessandra Mastronardi) was his happiness. He pestered her to go out with him and be his girlfriend until she finally agreed. Now they were happily married and had a son. Il Maestro (Alexandro Haber) was a successful artist who painted huge canvases. To Ernesto he was more than just a friend he was like a surrogate father. Ernesto delivered Il Maestro’s canvases to wealthy buyers and the artist wanted Ernesto to work for him. The main problem which faced Ernesto was that he was too accommodating to his friend Giacento and went and did things to please him rather than himself. Giacento persuaded him to take a job as a school cook even though he had no qualifications but Giacento told him not to worry it would be all taken care of, in other words it had been arranged for him to pass the test in cooking even though he didn’t even have to cook anything. There was the introduction to a very shady character named Fabrizio Del Monte (Sergio Rubini) who promised everything but delivered little. Beautiful young women 13