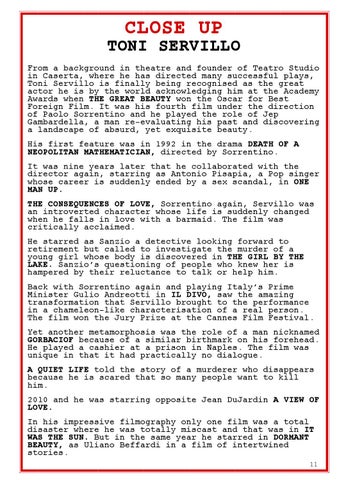 CLOSE UP TONI SERVILLO From a background in theatre and founder of Teatro Studio in Caserta, where he has directed many successful plays, Toni Servillo is finally being recognised as the great actor he is by the world acknowledging him at the Academy Awards when THE GREAT BEAUTY won the Oscar for Best Foreign Film. It was his fourth film under the direction of Paolo Sorrentino and he played the role of Jep Gambardella, a man re-evaluating his past and discovering a landscape of absurd, yet exquisite beauty. His first feature was in 1992 in the drama DEATH OF A NEOPOLITAN MATHEMATICIAN, directed by Sorrentino. It was nine years later that he collaborated with the director again, starring as Antonio Pisapia, a Pop singer whose career is suddenly ended by a sex scandal, in ONE MAN UP. THE CONSEQUENCES OF LOVE, Sorrentino again, Servillo was an introverted character whose life is suddenly changed when he falls in love with a barmaid. The film was critically acclaimed. He starred as Sanzio a detective looking forward to retirement but called to investigate the murder of a young girl whose body is discovered in THE GIRL BY THE LAKE. Sanzioâ&amp;#x20AC;&amp;#x2122;s questioning of people who knew her is hampered by their reluctance to talk or help him. Back with Sorrentino again and playing Italyâ&amp;#x20AC;&amp;#x2122;s Prime Minister Gulio Andreotti in IL DIVO, saw the amazing transformation that Servillo brought to the performance in a chameleon-like characterisation of a real person. The film won the Jury Prize at the Cannes Film Festival. Yet another metamorphosis was the role of a man nicknamed GORBACIOF because of a similar birthmark on his forehead. He played a cashier at a prison in Naples. The film was unique in that it had practically no dialogue. A QUIET LIFE told the story of a murderer who disappears because he is scared that so many people want to kill him. 2010 and he was starring opposite Jean DuJardin A VIEW OF LOVE. In his impressive filmography only one film was a total disaster where he was totally miscast and that was in IT WAS THE SUN. But in the same year he starred in DORMANT BEAUTY, as Uliano Beffardi in a film of intertwined stories. 11