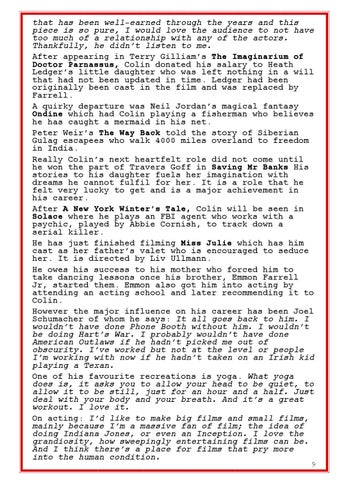 that has been well-earned through the years and this piece is so pure, I would love the audience to not have too much of a relationship with any of the actors. Thankfully, he didn’t listen to me. After appearing in Terry Gilliam’s The Imaginarium of Doctor Parnassus, Colin donated his salary to Heath Ledger’s little daughter who was left nothing in a will that had not been updated in time. Ledger had been originally been cast in the film and was replaced by Farrell. A quirky departure was Neil Jordan’s magical fantasy Ondine which had Colin playing a fisherman who believes he has caught a mermaid in his net. Peter Weir’s The Way Back told the story of Siberian Gulag escapees who walk 4000 miles overland to freedom in India. Really Colin’s next heartfelt role did not come until he won the part of Travers Goff in Saving Mr Banks His stories to his daughter fuels her imagination with dreams he cannot fulfil for her. It is a role that he felt very lucky to get and is a major achievement in his career. After A New York Winter’s Tale, Colin will be seen in Solace where he plays an FBI agent who works with a psychic, played by Abbie Cornish, to track down a serial killer. He has just finished filming Miss Julie which has him cast as her father’s valet who is encouraged to seduce her. It is directed by Liv Ullmann. He owes his success to his mother who forced him to take dancing lessons once his brother, Emmon Farrell Jr, started them. Emmon also got him into acting by attending an acting school and later recommending it to Colin. However the major influence on his career has been Joel Schumacher of whom he says: It all goes back to him. I wouldn’t have done Phone Booth without him. I wouldn’t be doing Hart’s War. I probably wouldn’t have done American Outlaws if he hadn’t picked me out of obscurity. I’ve worked but not at the level or people I’m working with now if he hadn’t taken on an Irish kid playing a Texan. One of his favourite recreations is yoga. What yoga does is, it asks you to allow your head to be quiet, to allow it to be still, just for an hour and a half. Just deal with your body and your breath. And it’s a great workout. I love it. On acting: I’d like to make big films and small films, mainly because I’m a massive fan of film; the idea of doing Indiana Jones, or even an Inception. I love the grandiosity, how sweepingly entertaining films can be. And I think there’s a place for films that pry more into the human condition. 9