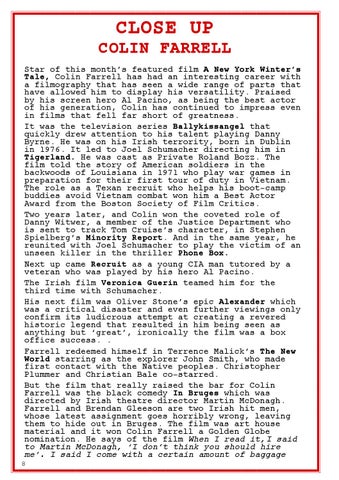 CLOSE UP COLIN FARRELL Star of this month’s featured film A New York Winter’s Tale, Colin Farrell has had an interesting career with a filmography that has seen a wide range of parts that have allowed him to display his versatility. Praised by his screen hero Al Pacino, as being the best actor of his generation, Colin has continued to impress even in films that fell far short of greatness. It was the television series Ballykissangel that quickly drew attention to his talent playing Danny Byrne. He was on his Irish terrority, born in Dublin in 1976. It led to Joel Schumacher directing him in Tigerland. He was cast as Private Roland Bozz. The film told the story of American soldiers in the backwoods of Louisiana in 1971 who play war games in preparation for their first tour of duty in Vietnam. The role as a Texan recruit who helps his boot-camp buddies avoid Vietnam combat won him a Best Actor Award from the Boston Society of Film Critics. Two years later, and Colin won the coveted role of Danny Witwer, a member of the Justice Department who is sent to track Tom Cruise’s character, in Stephen Spielberg’s Minority Report. And in the same year, he reunited with Joel Schumacher to play the victim of an unseen killer in the thriller Phone Box. Next up came Recruit as a young CIA man tutored by a veteran who was played by his hero Al Pacino. The Irish film Veronica Guerin teamed him for the third time with Schumacher. His next film was Oliver Stone’s epic Alexander which was a critical disaster and even further viewings only confirm its ludicrous attempt at creating a revered historic legend that resulted in him being seen as anything but ‘great’, ironically the film was a box office success. . Farrell redeemed himself in Terrence Malick’s The New World starring as the explorer John Smith, who made first contact with the Native peoples. Christopher Plummer and Christian Bale co-starred. But the film that really raised the bar for Colin Farrell was the black comedy In Bruges which was directed by Irish theatre director Martin McDonagh. Farrell and Brendan Gleeson are two Irish hit men, whose latest assignment goes horribly wrong, leaving them to hide out in Bruges. The film was art house material and it won Colin Farrell a Golden Globe nomination. He says of the film When I read it, I said to Martin McDonagh, ‘I don’t think you should hire me’. I said I come with a certain amount of baggage 8