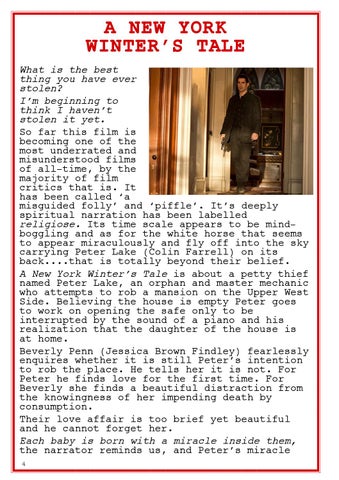 A NEW YORK WINTER’S TALE What is the best thing you have ever stolen? I’m beginning to think I haven’t stolen it yet. So far this film is becoming one of the most underrated and misunderstood films of all-time, by the majority of film critics that is. It has been called ‘a misguided folly’ and ‘piffle’. It’s deeply spiritual narration has been labelled religiose. Its time scale appears to be mindboggling and as for the white horse that seems to appear miraculously and fly off into the sky carrying Peter Lake (Colin Farrell) on its back....that is totally beyond their belief. A New York Winter’s Tale is about a petty thief named Peter Lake, an orphan and master mechanic who attempts to rob a mansion on the Upper West Side. Believing the house is empty Peter goes to work on opening the safe only to be interrupted by the sound of a piano and his realization that the daughter of the house is at home. Beverly Penn (Jessica Brown Findley) fearlessly enquires whether it is still Peter’s intention to rob the place. He tells her it is not. For Peter he finds love for the first time. For Beverly she finds a beautiful distraction from the knowingness of her impending death by consumption. Their love affair is too brief yet beautiful and he cannot forget her. Each baby is born with a miracle inside them, the narrator reminds us, and Peter’s miracle 4