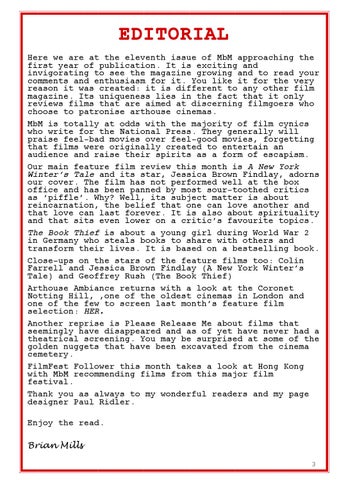 EDITORIAL Here we are at the eleventh issue of MbM approaching the first year of publication. It is exciting and invigorating to see the magazine growing and to read your comments and enthusiasm for it. You like it for the very reason it was created: it is different to any other film magazine. Its uniqueness lies in the fact that it only reviews films that are aimed at discerning filmgoers who choose to patronise arthouse cinemas. MbM is totally at odds with the majority of film cynics who write for the National Press. They generally will praise feel-bad movies over feel-good movies, forgetting that films were originally created to entertain an audience and raise their spirits as a form of escapism. Our main feature film review this month is A New York Winter’s Tale and its star, Jessica Brown Findlay, adorns our cover. The film has not performed well at the box office and has been panned by most sour-toothed critics as ‘piffle’. Why? Well, its subject matter is about reincarnation, the belief that one can love another and that love can last forever. It is also about spirituality and that sits even lower on a critic’s favourite topics. The Book Thief is about a young girl during World War 2 in Germany who steals books to share with others and transform their lives. It is based on a bestselling book. Close-ups on the stars of the feature films too: Colin Farrell and Jessica Brown Findlay (A New York Winter’s Tale) and Geoffrey Rush (The Book Thief) Arthouse Ambiance returns with a look at the Coronet Notting Hill, ,one of the oldest cinemas in London and one of the few to screen last month’s feature film selection: HER. Another reprise is Please Release Me about films that seemingly have disappeared and as of yet have never had a theatrical screening. You may be surprised at some of the golden nuggets that have been excavated from the cinema cemetery. FilmFest Follower this month takes a look at Hong Kong with MbM recommending films from this major film festival. Thank you as always to my wonderful readers and my page designer Paul Ridler. Enjoy the read.