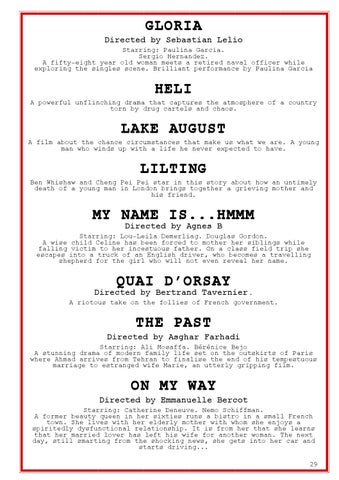 HELI A powerful unflinching drama that captures the atmosphere of a country torn by drug cartels and chaos.

LAKE AUGUST A film about the chance circumstances that make us what we are. A young man who winds up with a life he never expected to have.

LILTING Ben Whishaw and Cheng Pei Pei star in this story about how an untimely death of a young man in London brings together a grieving mother and his friend.

MY NAME IS...HMMM Directed by Agnes B Starring: Lou-Leila Demerliag. Douglas Gordon. A wise child Celine has been forced to mother her siblings while falling victim to her incestuous father. On a class field trip she escapes into a truck of an English driver, who becomes a travelling shepherd for the girl who will not even reveal her name.

Directed by Bertrand Tavernier. A riotous take on the follies of French government.

THE PAST Directed by Asghar Farhadi Starring: Ali Mosaffa. Bérénice Bejo A stunning drama of modern family life set on the outskirts of Paris where Ahmad arrives from Tehran to finalise the end of his tempestuous marriage to estranged wife Marie, an utterly gripping film.

ON MY WAY Directed by Emmanuelle Bercot Starring: Catherine Deneuve. Nemo Schiffman. A former beauty queen in her sixties runs a bistro in a small French town. She lives with her elderly mother with whom she enjoys a spiritedly dysfunctional relationship. It is from her that she learns that her married lover has left his wife for another woman. The next day, still smarting from the shocking news, she gets into her car and starts driving... 29