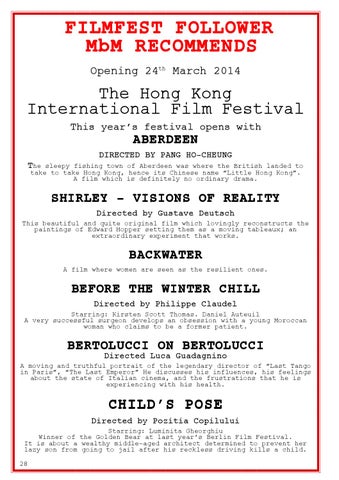 ABERDEEN DIRECTED BY PANG HO-CHEUNG The

sleepy fishing town of Aberdeen was where the British landed to take to take Hong Kong, hence its Chinese name “Little Hong Kong”. A film which is definitely no ordinary drama.

SHIRLEY - VISIONS OF REALITY Directed by Gustave Deutsch This beautiful and quite original film which lovingly reconstructs the paintings of Edward Hopper setting them as a moving tableaux; an extraordinary experiment that works.

BACKWATER A film where women are seen as the resilient ones.

BEFORE THE WINTER CHILL Directed by Philippe Claudel Starring: Kirsten Scott Thomas. Daniel Auteuil A very successful surgeon develops an obsession with a young Moroccan woman who claims to be a former patient.

BERTOLUCCI ON BERTOLUCCI Directed Luca Guadagnino A moving and truthful portrait of the legendary director of “Last Tango in Paris”, “The Last Emperor” He discusses his influences, his feelings about the state of Italian cinema, and the frustrations that he is experiencing with his health.

CHILD’S POSE Directed by Pozitia Copilului Starring: Luminita Gheorghiu Winner of the Golden Bear at last year’s Berlin Film Festival. It is about a wealthy middle-aged architect determined to prevent her lazy son from going to jail after his reckless driving kills a child. 28