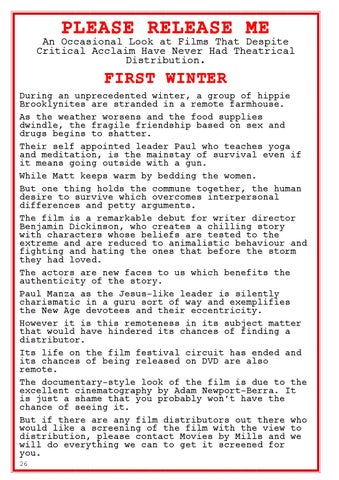 An Occasional Look at Films That Despite Critical Acclaim Have Never Had Theatrical Distribution.

FIRST WINTER During an unprecedented winter, a group of hippie Brooklynites are stranded in a remote farmhouse. As the weather worsens and the food supplies dwindle, the fragile friendship based on sex and drugs begins to shatter. Their self appointed leader Paul who teaches yoga and meditation, is the mainstay of survival even if it means going outside with a gun. While Matt keeps warm by bedding the women. But one thing holds the commune together, the human desire to survive which overcomes interpersonal differences and petty arguments. The film is a remarkable debut for writer director Benjamin Dickinson, who creates a chilling story with characters whose beliefs are tested to the extreme and are reduced to animalistic behaviour and fighting and hating the ones that before the storm they had loved. The actors are new faces to us which benefits the authenticity of the story. Paul Manza as the Jesus-like leader is silently charismatic in a guru sort of way and exemplifies the New Age devotees and their eccentricity. However it is this remoteness in its subject matter that would have hindered its chances of finding a distributor. Its life on the film festival circuit has ended and its chances of being released on DVD are also remote. The documentary-style look of the film is due to the excellent cinematography by Adam Newport-Berra. It is just a shame that you probably wonâ&amp;#x20AC;&amp;#x2122;t have the chance of seeing it. But if there are any film distributors out there who would like a screening of the film with the view to distribution, please contact Movies by Mills and we will do everything we can to get it screened for you. 26