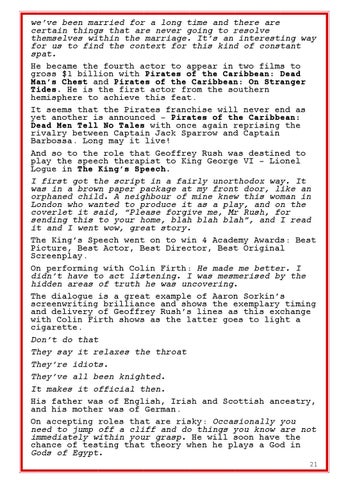 we’ve been married for a long time and there are certain things that are never going to resolve themselves within the marriage. It’s an interesting way for us to find the context for this kind of constant spat. He became the fourth actor to appear in two films to gross $1 billion with Pirates of the Caribbean: Dead Man’s Chest and Pirates of the Caribbean: On Stranger Tides. He is the first actor from the southern hemisphere to achieve this feat. It seems that the Pirates franchise will never end as yet another is announced – Pirates of the Caribbean: Dead Men Tell No Tales with once again reprising the rivalry between Captain Jack Sparrow and Captain Barbossa. Long may it live! And so to the role that Geoffrey Rush was destined to play the speech therapist to King George VI – Lionel Logue in The King’s Speech. I first got the script in a fairly unorthodox way. It was in a brown paper package at my front door, like an orphaned child. A neighbour of mine knew this woman in London who wanted to produce it as a play, and on the coverlet it said, “Please forgive me, Mr Rush, for sending this to your home, blah blah blah”, and I read it and I went wow, great story. The King’s Speech went on to win 4 Academy Awards: Best Picture, Best Actor, Best Director, Best Original Screenplay. On performing with Colin Firth: He made me better. I didn’t have to act listening. I was mesmerised by the hidden areas of truth he was uncovering. The dialogue is a great example of Aaron Sorkin’s screenwriting brilliance and shows the exemplary timing and delivery of Geoffrey Rush’s lines as this exchange with Colin Firth shows as the latter goes to light a cigarette. Don’t do that They say it relaxes the throat They’re idiots. They’ve all been knighted. It makes it official then. His father was of English, Irish and Scottish ancestry, and his mother was of German. On accepting roles that are risky: Occasionally you need to jump off a cliff and do things you know are not immediately within your grasp. He will soon have the chance of testing that theory when he plays a God in Gods of Egypt. 21