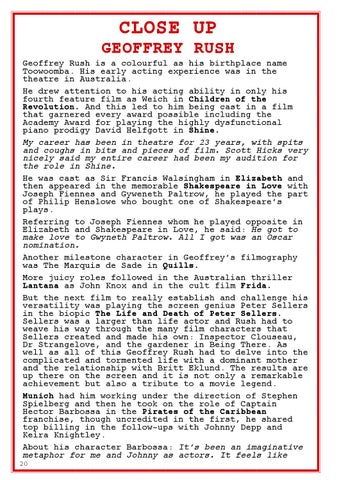 CLOSE UP GEOFFREY RUSH Geoffrey Rush is a colourful as his birthplace name Toowoomba. His early acting experience was in the theatre in Australia. He drew attention to his acting ability in only his fourth feature film as Weich in Children of the Revolution. And this led to him being cast in a film that garnered every award possible including the Academy Award for playing the highly dysfunctional piano prodigy David Helfgott in Shine. My career has been in theatre for 23 years, with spits and coughs in bits and pieces of film. Scott Hicks very nicely said my entire career had been my audition for the role in Shine. He was cast as Sir Francis Walsingham in Elizabeth and then appeared in the memorable Shakespeare in Love with Joseph Fiennes and Gyweneth Paltrow, he played the part of Philip Henslowe who bought one of Shakespeare’s plays. Referring to Joseph Fiennes whom he played opposite in Elizabeth and Shakespeare in Love, he said: He got to make love to Gwyneth Paltrow. All I got was an Oscar nomination. Another milestone character in Geoffrey’s filmography was The Marquis de Sade in Quills. More juicy roles followed in the Australian thriller Lantana as John Knox and in the cult film Frida. But the next film to really establish and challenge his versatility was playing the screen genius Peter Sellers in the biopic The Life and Death of Peter Sellers. Sellers was a larger than life actor and Rush had to weave his way through the many film characters that Sellers created and made his own: Inspector Clouseau, Dr Strangelove, and the gardener in Being There. As well as all of this Geoffrey Rush had to delve into the complicated and tormented life with a dominant mother and the relationship with Britt Eklund. The results are up there on the screen and it is not only a remarkable achievement but also a tribute to a movie legend. Munich had him working under the direction of Stephen Spielberg and then he took on the role of Captain Hector Barbossa in the Pirates of the Caribbean franchise, though uncredited in the first, he shared top billing in the follow-ups with Johnny Depp and Keira Knightley. About his character Barbossa: It’s been an imaginative metaphor for me and Johnny as actors. It feels like 20