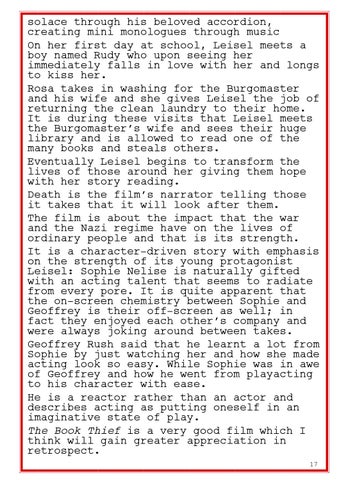 solace through his beloved accordion, creating mini monologues through music On her first day at school, Leisel meets a boy named Rudy who upon seeing her immediately falls in love with her and longs to kiss her. Rosa takes in washing for the Burgomaster and his wife and she gives Leisel the job of returning the clean laundry to their home. It is during these visits that Leisel meets the Burgomasterâ&#x20AC;&#x2122;s wife and sees their huge library and is allowed to read one of the many books and steals others. Eventually Leisel begins to transform the lives of those around her giving them hope with her story reading. Death is the filmâ&#x20AC;&#x2122;s narrator telling those it takes that it will look after them. The film is about the impact that the war and the Nazi regime have on the lives of ordinary people and that is its strength. It is a character-driven story with emphasis on the strength of its young protagonist Leisel: Sophie Nelise is naturally gifted with an acting talent that seems to radiate from every pore. It is quite apparent that the on-screen chemistry between Sophie and Geoffrey is their off-screen as well; in fact they enjoyed each otherâ&#x20AC;&#x2122;s company and were always joking around between takes. Geoffrey Rush said that he learnt a lot from Sophie by just watching her and how she made acting look so easy. While Sophie was in awe of Geoffrey and how he went from playacting to his character with ease. He is a reactor rather than an actor and describes acting as putting oneself in an imaginative state of play. The Book Thief is a very good film which I think will gain greater appreciation in retrospect. 17