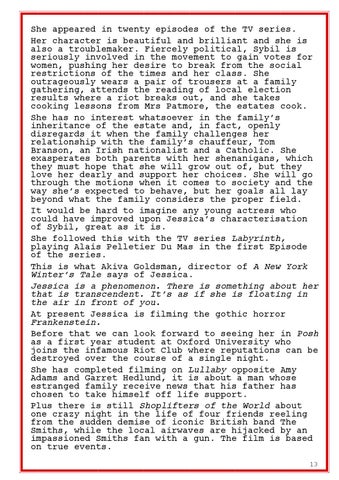 She appeared in twenty episodes of the TV series. Her character is beautiful and brilliant and she is also a troublemaker. Fiercely political, Sybil is seriously involved in the movement to gain votes for women, pushing her desire to break from the social restrictions of the times and her class. She outrageously wears a pair of trousers at a family gathering, attends the reading of local election results where a riot breaks out, and she takes cooking lessons from Mrs Patmore, the estates cook. She has no interest whatsoever in the family’s inheritance of the estate and, in fact, openly disregards it when the family challenges her relationship with the family’s chauffeur, Tom Branson, an Irish nationalist and a Catholic. She exasperates both parents with her shenanigans, which they must hope that she will grow out of, but they love her dearly and support her choices. She will go through the motions when it comes to society and the way she’s expected to behave, but her goals all lay beyond what the family considers the proper field. It would be hard to imagine any young actress who could have improved upon Jessica’s characterisation of Sybil, great as it is. She followed this with the TV series Labyrinth, playing Alais Pelletier Du Mas in the first Episode of the series. This is what Akiva Goldsman, director of A New York Winter’s Tale says of Jessica. Jessica is a phenomenon. There is something about her that is transcendent. It’s as if she is floating in the air in front of you. At present Jessica is filming the gothic horror Frankenstein. Before that we can look forward to seeing her in Posh as a first year student at Oxford University who joins the infamous Riot Club where reputations can be destroyed over the course of a single night. She has completed filming on Lullaby opposite Amy Adams and Garret Hedlund, it is about a man whose estranged family receive news that his father has chosen to take himself off life support. Plus there is still Shoplifters of the World about one crazy night in the life of four friends reeling from the sudden demise of iconic British band The Smiths, while the local airwaves are hijacked by an impassioned Smiths fan with a gun. The film is based on true events. 13