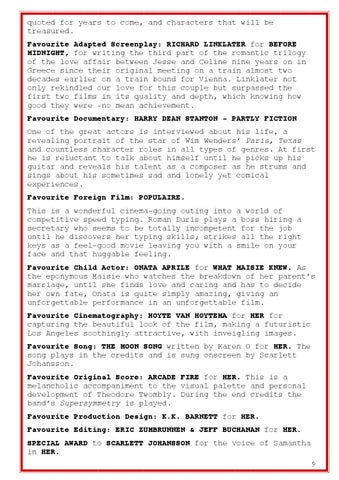 quoted for years to come, and characters that will be treasured. Favourite Adapted Screenplay: RICHARD LINKLATER for BEFORE MIDNIGHT, for writing the third part of the romantic trilogy of the love affair between Jesse and Celine nine years on in Greece since their original meeting on a train almost two decades earlier on a train bound for Vienna. Linklater not only rekindled our love for this couple but surpassed the first two films in its quality and depth, which knowing how good they were -no mean achievement. Favourite Documentary: HARRY DEAN STANTON – PARTLY FICTION One of the great actors is interviewed about his life, a revealing portrait of the star of Wim Wenders’ Paris, Texas and countless character roles in all types of genres. At first he is reluctant to talk about himself until he picks up his guitar and reveals his talent as a composer as he strums and sings about his sometimes sad and lonely yet comical experiences. Favourite Foreign Film: POPULAIRE. This is a wonderful cinema-going outing into a world of competitive speed typing. Roman Duris plays a boss hiring a secretary who seems to be totally incompetent for the job until he discovers her typing skills; strikes all the right keys as a feel-good movie leaving you with a smile on your face and that huggable feeling. Favourite Child Actor: ONATA APRILE for WHAT MAISIE KNEW. As the eponymous Maisie who watches the breakdown of her parent’s marriage, until she finds love and caring and has to decide her own fate, Onata is quite simply amazing, giving an unforgettable performance in an unforgettable film. Favourite Cinematography: HOYTE VAN HOYTEMA for HER for capturing the beautiful look of the film, making a futuristic Los Angeles soothingly attractive, with inveigling images. Favourite Song: THE MOON SONG written by Karen O for HER. The song plays in the credits and is sung onscreen by Scarlett Johansson. Favourite Original Score: ARCADE FIRE for HER. This is a melancholic accompaniment to the visual palette and personal development of Theodore Twombly. During the end credits the band’s Supersymmetry is played. Favourite Production Design: K.K. BARNETT for HER. Favourite Editing: ERIC ZUMBRUNNEN & JEFF BUCHANAN for HER. SPECIAL AWARD to SCARLETT JOHANSSON for the voice of Samantha in HER. 9