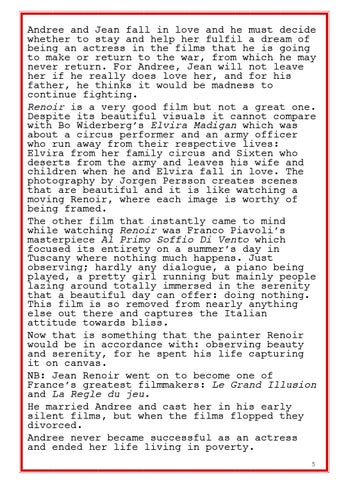 Andree and Jean fall in love and he must decide whether to stay and help her fulfil a dream of being an actress in the films that he is going to make or return to the war, from which he may never return. For Andree, Jean will not leave her if he really does love her, and for his father, he thinks it would be madness to continue fighting. Renoir is a very good film but not a great one. Despite its beautiful visuals it cannot compare with Bo Widerberg’s Elvira Madigan which was about a circus performer and an army officer who run away from their respective lives: Elvira from her family circus and Sixten who deserts from the army and leaves his wife and children when he and Elvira fall in love. The photography by Jorgen Persson creates scenes that are beautiful and it is like watching a moving Renoir, where each image is worthy of being framed. The other film that instantly came to mind while watching Renoir was Franco Piavoli’s masterpiece Al Primo Soffio Di Vento which focused its entirety on a summer’s day in Tuscany where nothing much happens. Just observing; hardly any dialogue, a piano being played, a pretty girl running but mainly people lazing around totally immersed in the serenity that a beautiful day can offer: doing nothing. This film is so removed from nearly anything else out there and captures the Italian attitude towards bliss. Now that is something that the painter Renoir would be in accordance with: observing beauty and serenity, for he spent his life capturing it on canvas. NB: Jean Renoir went on to become one of France’s greatest filmmakers: Le Grand Illusion and La Regle du jeu. He married Andree and cast her in his early silent films, but when the films flopped they divorced. Andree never became successful as an actress and ended her life living in poverty. 5