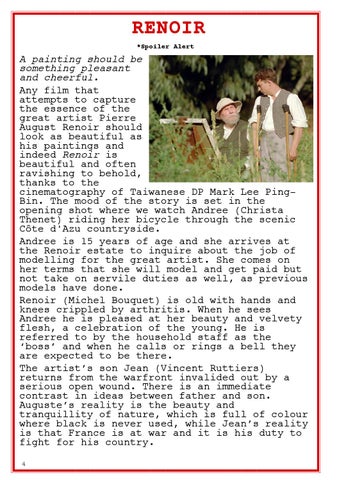 A painting should be something pleasant and cheerful. Any film that attempts to capture the essence of the great artist Pierre August Renoir should look as beautiful as his paintings and indeed Renoir is beautiful and often ravishing to behold, thanks to the cinematography of Taiwanese DP Mark Lee PingBin. The mood of the story is set in the opening shot where we watch Andree (Christa Thenet) riding her bicycle through the scenic Côte d'Azu countryside. Andree is 15 years of age and she arrives at the Renoir estate to inquire about the job of modelling for the great artist. She comes on her terms that she will model and get paid but not take on servile duties as well, as previous models have done. Renoir (Michel Bouquet) is old with hands and knees crippled by arthritis. When he sees Andree he is pleased at her beauty and velvety flesh, a celebration of the young. He is referred to by the household staff as the ‘boss’ and when he calls or rings a bell they are expected to be there. The artist’s son Jean (Vincent Ruttiers) returns from the warfront invalided out by a serious open wound. There is an immediate contrast in ideas between father and son. Auguste’s reality is the beauty and tranquillity of nature, which is full of colour where black is never used, while Jean’s reality is that France is at war and it is his duty to fight for his country. 4