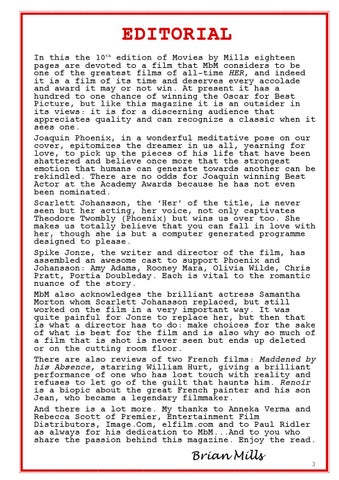 EDITORIAL In this the 10th edition of Movies by Mills eighteen pages are devoted to a film that MbM considers to be one of the greatest films of all-time HER, and indeed it is a film of its time and deserves every accolade and award it may or not win. At present it has a hundred to one chance of winning the Oscar for Best Picture, but like this magazine it is an outsider in its views: it is for a discerning audience that appreciates quality and can recognize a classic when it sees one. Joaquin Phoenix, in a wonderful meditative pose on our cover, epitomizes the dreamer in us all, yearning for love, to pick up the pieces of his life that have been shattered and believe once more that the strongest emotion that humans can generate towards another can be rekindled. There are no odds for Joaquin winning Best Actor at the Academy Awards because he has not even been nominated. Scarlett Johansson, the â&#x20AC;&#x2DC;Herâ&#x20AC;&#x2122; of the title, is never seen but her acting, her voice, not only captivates Theodore Twombly (Phoenix) but wins us over too. She makes us totally believe that you can fall in love with her, though she is but a computer generated programme designed to please. Spike Jonze, the writer and director of the film, has assembled an awesome cast to support Phoenix and Johansson: Amy Adams, Rooney Mara, Olivia Wilde, Chris Pratt, Portia Doubleday. Each is vital to the romantic nuance of the story. MbM also acknowledges the brilliant actress Samantha Morton whom Scarlett Johansson replaced, but still worked on the film in a very important way. It was quite painful for Jonze to replace her, but then that is what a director has to do: make choices for the sake of what is best for the film and is also why so much of a film that is shot is never seen but ends up deleted or on the cutting room floor. There are also reviews of two French films: Maddened by his Absence, starring William Hurt, giving a brilliant performance of one who has lost touch with reality and refuses to let go of the guilt that haunts him. Renoir is a biopic about the great French painter and his son Jean, who became a legendary filmmaker. And there is a lot more. My thanks to Anneka Verma and Rebecca Scott of Premier, Entertainment Film Distributors, Image.Com, elfilm.com and to Paul Ridler as always for his dedication to MbM...And to you who share the passion behind this magazine. Enjoy the read.