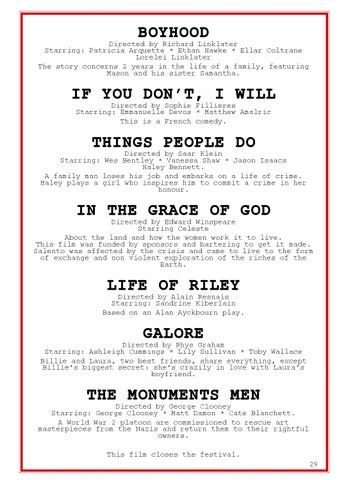 IF YOU DON’T, I WILL Directed by Sophie Fillieres Starring: Emmanuelle Devos * Matthew Amalric This is a French comedy.

THINGS PEOPLE DO Directed by Saar Klein Starring: Wes Bentley * Vanessa Shaw * Jason Isaacs Haley Bennett. A family man loses his job and embarks on a life of crime. Haley plays a girl who inspires him to commit a crime in her honour.

IN THE GRACE OF GOD Directed by Edward Winspeare Starring Celeste About the land and how the women work it to live. This film was funded by sponsors and bartering to get it made. Salento was affected by the crisis and came to live to the form of exchange and non violent exploration of the riches of the Earth.

LIFE OF RILEY Directed by Alain Resnais Starring: Sandrine Kiberlain Based on an Alan Ayckbourn play.

THE MONUMENTS MEN Directed by George Clooney Starring: George Clooney * Matt Damon * Cate Blanchett. A World War 2 platoon are commissioned to rescue art masterpieces from the Nazis and return them to their rightful owners. This film closes the festival. 29