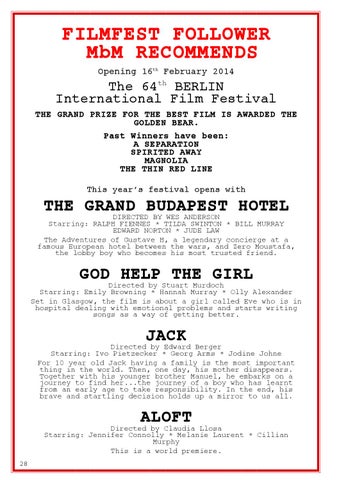 The 64th BERLIN International Film Festival THE GRAND PRIZE FOR THE BEST FILM IS AWARDED THE GOLDEN BEAR. Past Winners have been: A SEPARATION SPIRITED AWAY MAGNOLIA THE THIN RED LINE This yearâ&amp;#x20AC;&amp;#x2122;s festival opens with

GOD HELP THE GIRL Directed by Stuart Murdoch Starring: Emily Browning * Hannah Murray * Olly Alexander Set in Glasgow, the film is about a girl called Eve who is in hospital dealing with emotional problems and starts writing songs as a way of getting better.

JACK Directed by Edward Berger Starring: Ivo Pietzecker * Georg Arms * Jodine Johne For 10 year old Jack having a family is the most important thing in the world. Then, one day, his mother disappears. Together with his younger brother Manuel, he embarks on a journey to find her...the journey of a boy who has learnt from an early age to take responsibility. In the end, his brave and startling decision holds up a mirror to us all.