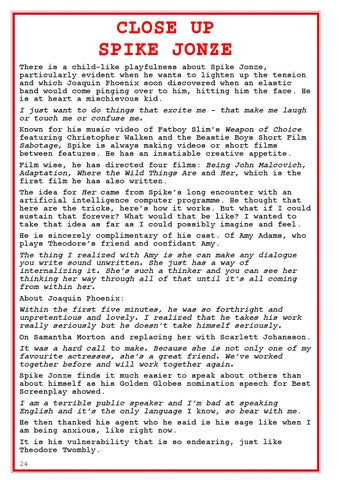 CLOSE UP SPIKE JONZE There is a child-like playfulness about Spike Jonze, particularly evident when he wants to lighten up the tension and which Joaquin Phoenix soon discovered when an elastic band would come pinging over to him, hitting him the face. He is at heart a mischievous kid. I just want to do things that excite me – that make me laugh or touch me or confuse me. Known for his music video of Fatboy Slim’s Weapon of Choice featuring Christopher Walken and the Beastie Boys Short Film Sabotage, Spike is always making videos or short films between features. He has an insatiable creative appetite. Film wise, he has directed four films: Being John Malcovich, Adaptation, Where the Wild Things Are and Her, which is the first film he has also written. The idea for Her came from Spike’s long encounter with an artificial intelligence computer programme. He thought that here are the tricks, here’s how it works. But what if I could sustain that forever? What would that be like? I wanted to take that idea as far as I could possibly imagine and feel. He is sincerely complimentary of his cast. Of Amy Adams, who plays Theodore’s friend and confidant Amy. The thing I realized with Amy is she can make any dialogue you write sound unwritten. She just has a way of internalizing it. She’s such a thinker and you can see her thinking her way through all of that until it’s all coming from within her. About Joaquin Phoenix: Within the first five minutes, he was so forthright and unpretentious and lovely. I realized that he takes his work really seriously but he doesn’t take himself seriously. On Samantha Morton and replacing her with Scarlett Johansson. It was a hard call to make. Because she is not only one of my favourite actresses, she’s a great friend. We’ve worked together before and will work together again. Spike Jonze finds it much easier to speak about others than about himself as his Golden Globes nomination speech for Best Screenplay showed. I am a terrible public speaker and I’m bad at speaking English and it’s the only language I know, so bear with me. He then thanked his agent who he said is his sage like when I am being anxious, like right now. It is his vulnerability that is so endearing, just like Theodore Twombly. 24