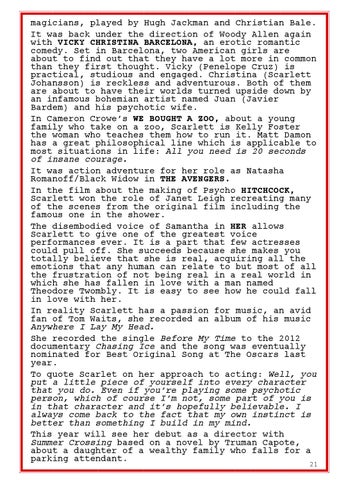 magicians, played by Hugh Jackman and Christian Bale. It was back under the direction of Woody Allen again with VICKY CHRISTINA BARCELONA, an erotic romantic comedy. Set in Barcelona, two American girls are about to find out that they have a lot more in common than they first thought. Vicky (Penelope Cruz) is practical, studious and engaged. Christina (Scarlett Johansson) is reckless and adventurous. Both of them are about to have their worlds turned upside down by an infamous bohemian artist named Juan (Javier Bardem) and his psychotic wife. In Cameron Crowe’s WE BOUGHT A ZOO, about a young family who take on a zoo, Scarlett is Kelly Foster the woman who teaches them how to run it. Matt Damon has a great philosophical line which is applicable to most situations in life: All you need is 20 seconds of insane courage. It was action adventure for her role as Natasha Romanoff/Black Widow in THE AVENGERS. In the film about the making of Psycho HITCHCOCK, Scarlett won the role of Janet Leigh recreating many of the scenes from the original film including the famous one in the shower. The disembodied voice of Samantha in HER allows Scarlett to give one of the greatest voice performances ever. It is a part that few actresses could pull off. She succeeds because she makes you totally believe that she is real, acquiring all the emotions that any human can relate to but most of all the frustration of not being real in a real world in which she has fallen in love with a man named Theodore Twombly. It is easy to see how he could fall in love with her. In reality Scarlett has a passion for music, an avid fan of Tom Waits, she recorded an album of his music Anywhere I Lay My Head. She recorded the single Before My Time to the 2012 documentary Chasing Ice and the song was eventually nominated for Best Original Song at The Oscars last year. To quote Scarlet on her approach to acting: Well, you put a little piece of yourself into every character that you do. Even if you’re playing some psychotic person, which of course I’m not, some part of you is in that character and it’s hopefully believable. I always come back to the fact that my own instinct is better than something I build in my mind. This year will see her debut as a director with Summer Crossing based on a novel by Truman Capote, about a daughter of a wealthy family who falls for a parking attendant.