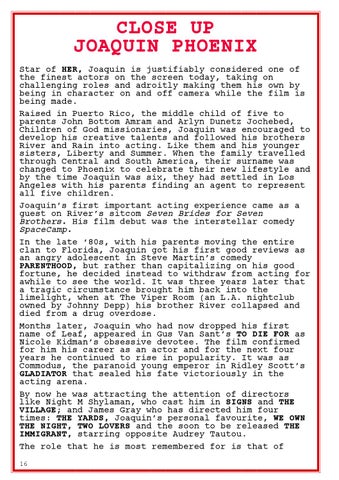 CLOSE UP JOAQUIN PHOENIX Star of HER, Joaquin is justifiably considered one of the finest actors on the screen today, taking on challenging roles and adroitly making them his own by being in character on and off camera while the film is being made. Raised in Puerto Rico, the middle child of five to parents John Bottom Amram and Arlyn Dunetz Jochebed, Children of God missionaries, Joaquin was encouraged to develop his creative talents and followed his brothers River and Rain into acting. Like them and his younger sisters, Liberty and Summer. When the family travelled through Central and South America, their surname was changed to Phoenix to celebrate their new lifestyle and by the time Joaquin was six, they had settled in Los Angeles with his parents finding an agent to represent all five children. Joaquin’s first important acting experience came as a guest on River’s sitcom Seven Brides for Seven Brothers. His film debut was the interstellar comedy SpaceCamp. In the late ‘80s, with his parents moving the entire clan to Florida, Joaquin got his first good reviews as an angry adolescent in Steve Martin’s comedy PARENTHOOD, but rather than capitalizing on his good fortune, he decided instead to withdraw from acting for awhile to see the world. It was three years later that a tragic circumstance brought him back into the limelight, when at The Viper Room (an L.A. nightclub owned by Johnny Depp) his brother River collapsed and died from a drug overdose. Months later, Joaquin who had now dropped his first name of Leaf, appeared in Gus Van Sant’s TO DIE FOR as Nicole Kidman’s obsessive devotee. The film confirmed for him his career as an actor and for the next four years he continued to rise in popularity. It was as Commodus, the paranoid young emperor in Ridley Scott’s GLADIATOR that sealed his fate victoriously in the acting arena. By now he was attracting the attention of directors like Night M Shylaman, who cast him in SIGNS and THE VILLAGE; and James Gray who has directed him four times: THE YARDS, Joaquin’s personal favourite, WE OWN THE NIGHT, TWO LOVERS and the soon to be released THE IMMIGRANT, starring opposite Audrey Tautou. The role that he is most remembered for is that of 16