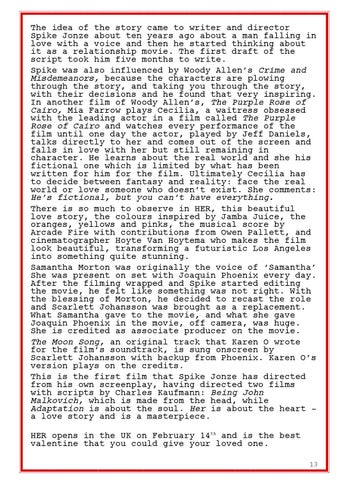 The idea of the story came to writer and director Spike Jonze about ten years ago about a man falling in love with a voice and then he started thinking about it as a relationship movie. The first draft of the script took him five months to write. Spike was also influenced by Woody Allen’s Crime and Misdemeanors, because the characters are plowing through the story, and taking you through the story, with their decisions and he found that very inspiring. In another film of Woody Allen’s, The Purple Rose of Cairo, Mia Farrow plays Cecilia, a waitress obsessed with the leading actor in a film called The Purple Rose of Cairo and watches every performance of the film until one day the actor, played by Jeff Daniels, talks directly to her and comes out of the screen and falls in love with her but still remaining in character. He learns about the real world and she his fictional one which is limited by what has been written for him for the film. Ultimately Cecilia has to decide between fantasy and reality: face the real world or love someone who doesn’t exist. She comments: He’s fictional, but you can’t have everything. There is so much to observe in HER, this beautiful love story, the colours inspired by Jamba Juice, the oranges, yellows and pinks, the musical score by Arcade Fire with contributions from Owen Pallett, and cinematographer Hoyte Van Hoytema who makes the film look beautiful, transforming a futuristic Los Angeles into something quite stunning. Samantha Morton was originally the voice of ‘Samantha’ She was present on set with Joaquin Phoenix every day. After the filming wrapped and Spike started editing the movie, he felt like something was not right. With the blessing of Morton, he decided to recast the role and Scarlett Johansson was brought as a replacement. What Samantha gave to the movie, and what she gave Joaquin Phoenix in the movie, off camera, was huge. She is credited as associate producer on the movie. The Moon Song, an original track that Karen O wrote for the film’s soundtrack, is sung onscreen by Scarlett Johansson with backup from Phoenix. Karen O’s version plays on the credits. This is the first film that Spike Jonze has directed from his own screenplay, having directed two films with scripts by Charles Kaufmann: Being John Malkovich, which is made from the head, while Adaptation is about the soul. Her is about the heart – a love story and is a masterpiece. HER opens in the UK on February 14th and is the best valentine that you could give your loved one. 13