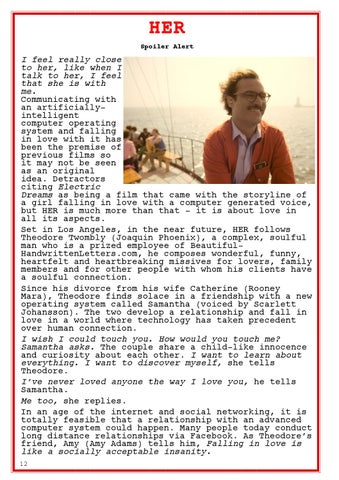 I feel really close to her, like when I talk to her, I feel that she is with me. Communicating with an artificiallyintelligent computer operating system and falling in love with it has been the premise of previous films so it may not be seen as an original idea. Detractors citing Electric Dreams as being a film that came with the storyline of a girl falling in love with a computer generated voice, but HER is much more than that – it is about love in all its aspects. Set in Los Angeles, in the near future, HER follows Theodore Twombly (Joaquin Phoenix), a complex, soulful man who is a prized employee of BeautifulHandwrittenLetters.com, he composes wonderful, funny, heartfelt and heartbreaking missives for lovers, family members and for other people with whom his clients have a soulful connection. Since his divorce from his wife Catherine (Rooney Mara), Theodore finds solace in a friendship with a new operating system called Samantha (voiced by Scarlett Johansson). The two develop a relationship and fall in love in a world where technology has taken precedent over human connection. I wish I could touch you. How would you touch me? Samantha asks. The couple share a child-like innocence and curiosity about each other. I want to learn about everything. I want to discover myself, she tells Theodore. I’ve never loved anyone the way I love you, he tells Samantha. Me too, she replies. In an age of the internet and social networking, it is totally feasible that a relationship with an advanced computer system could happen. Many people today conduct long distance relationships via Facebook. As Theodore’s friend, Amy (Amy Adams) tells him, Falling in love is like a socially acceptable insanity. 12