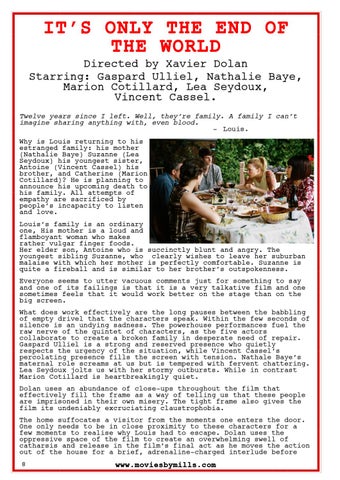 IT’S ONLY THE END OF THE WORLD Directed by Xavier Dolan Starring: Gaspard Ulliel, Nathalie Baye, Marion Cotillard, Lea Seydoux, Vincent Cassel. Twelve years since I left. Well, they’re family. A family I can’t imagine sharing anything with, even blood. - Louis. Why is Louis returning to his estranged family: his mother (Nathalie Baye) Suzanne (Lea Seydoux) his youngest sister, Antoine (Vincent Cassel) his brother, and Catherine (Marion Cotillard)? He is planning to announce his upcoming death to his family. All attempts of empathy are sacrificed by people’s incapacity to listen and love. Louis’s family is an ordinary one, His mother is a loud and flamboyant woman who makes rather vulgar finger foods. Her elder son, Antoine who is succinctly blunt and angry. The youngest sibling Suzanne, who clearly wishes to leave her suburban malaise with which her mother is perfectly comfortable. Suzanne is quite a fireball and is similar to her brother’s outspokenness. Everyone seems to utter vacuous comments just for something to say and one of its failings is that it is a very talkative film and one sometimes feels that it would work better on the stage than on the big screen.

What does work effectively are the long pauses between the babbling of empty drivel that the characters speak. Within the few seconds of silence is an undying sadness. The powerhouse performances fuel the raw nerve of the quintet of characters, as the five actors collaborate to create a broken family in desperate need of repair. Gaspard Ulliel is a strong and reserved presence who quietly respects the urgency of the situation, while Vincent Cassel’s percolating presence fills the screen with tension. Nathale Baye’s maternal role screams at us but is tempered with fervent chattering. Lea Seydoux jolts us with her stormy outbursts. While in contrast Marion Cotillard is heartbreakingly quiet. Dolan uses an abundance of close-ups throughout the film that effectively fill the frame as a way of telling us that these people are imprisoned in their own misery. The tight frame also gives the film its undeniably excruciating claustrophobia. The home suffocates a visitor from the moments one enters the door. One only needs to be in close proximity to these characters for a few moments to realise why Louis had to escape. Dolan uses the oppressive space of the film to create an overwhelming swell of catharsis and release in the film’s final act as he moves the action out of the house for a brief, adrenaline-charged interlude before 8