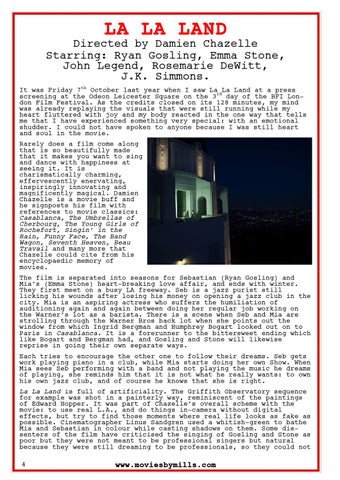 LA LA LAND Directed by Damien Chazelle Starring: Ryan Gosling, Emma Stone, John Legend, Rosemarie DeWitt, J.K. Simmons. It was Friday 7th October last year when I saw LardLa Land at a press screening at the Odeon Leicester Square on the 3 day of the BFI London Film Festival. As the credits closed on its 128 minutes, my mind was already replaying the visuals that were still running while my heart fluttered with joy and my body reacted in the one way that tells me that I have experienced something very special: with an emotional shudder. I could not have spoken to anyone because I was still heart and soul in the movie. Rarely does a film come along that is so beautifully made that it makes you want to sing and dance with happiness at seeing it. It is charismatically charming, effervescently enervating, inspiringly innovating and magnificently magical. Damien Chazelle is a movie buff and he signposts his film with references to movie classics: Casablanca, The Umbrellas of Cherbourg, The Young Girls of Rochefort, Singin’ in the Rain, Funny Face, The Band Wagon, Seventh Heaven, Beau Travail and many more that Chazelle could cite from his encyclopaedic memory of movies. The film is separated into seasons for Sebastian (Ryan Gosling) and Mia’s (Emma Stone) heart-breaking love affair, and ends with winter. They first meet on a busy LA freeway. Seb is a jazz purist still licking his wounds after losing his money on opening a jazz club in the city. Mia is an aspiring actress who suffers the humiliation of auditioning again and again between doing her regular job working on the Warner’s lot as a barista. There is a scene when Seb and Mia are strolling through the Warner Bros back lot when she points out the window from which Ingrid Bergman and Humphrey Bogart looked out on to Paris in Casablanca. It is a forerunner to the bittersweet ending which like Bogart and Bergman had, and Gosling and Stone will likewise reprise in going their own separate ways. Each tries to encourage the other one to follow their dreams. Seb gets work playing piano in a club, while Mia starts doing her own Show. When Mia sees Seb performing with a band and not playing the music he dreams of playing, she reminds him that it is not what he really wants: to own his own jazz club, and of course he knows that she is right. La La Land is full of artificiality. The Griffith Observatory sequence for example was shot in a painterly way, reminiscent of the paintings of Edward Hopper. It was part of Chazelle’s overall scheme with the movie: to use real L.A., and do things in-camera without digital effects, but try to find those moments where real life looks as fake as possible. Cinematographer Linus Sandgren used a whitish-green to bathe Mia and Sebastian in colour while casting shadows on them. Some dissenters of the film have criticised the singing of Gosling and Stone as poor but they were not meant to be professional singers but natural because they were still dreaming to be professionals, so they could not 4