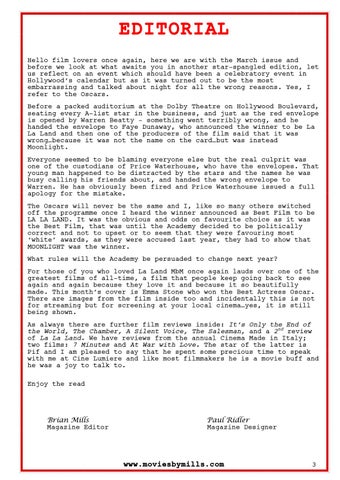 EDITORIAL Hello film lovers once again, here we are with the March issue and before we look at what awaits you in another star-spangled edition, let us reflect on an event which should have been a celebratory event in Hollywood’s calendar but as it was turned out to be the most embarrassing and talked about night for all the wrong reasons. Yes, I refer to the Oscars. Before a packed auditorium at the Dolby Theatre on Hollywood Boulevard, seating every A-list star in the business, and just as the red envelope is opened by Warren Beatty – something went terribly wrong, and he handed the envelope to Faye Dunaway, who announced the winner to be La La Land and then one of the producers of the film said that it was wrong…because it was not the name on the card…but was instead Moonlight. Everyone seemed to be blaming everyone else but the real culprit was one of the custodians of Price Waterhouse, who have the envelopes. That young man happened to be distracted by the stars and the names he was busy calling his friends about, and handed the wrong envelope to Warren. He has obviously been fired and Price Waterhouse issued a full apology for the mistake. The Oscars will never be the same and I, like so many others switched off the programme once I heard the winner announced as Best Film to be LA LA LAND. It was the obvious and odds on favourite choice as it was the Best Film, that was until the Academy decided to be politically correct and not to upset or to seem that they were favouring most ‘white’ awards, as they were accused last year, they had to show that MOONLIGHT was the winner. What rules will the Academy be persuaded to change next year? For those of you who loved La Land MbM once again lauds over one of the greatest films of all-time, a film that people keep going back to see again and again because they love it and because it so beautifully made. This month’s cover is Emma Stone who won the Best Actress Oscar. There are images from the film inside too and incidentally this is not for streaming but for screening at your local cinema…yes, it is still being shown. As always there are further film reviews inside: It’s Only the End of the World, The Chamber, A Silent Voice, The Salesman, and a 2nd review of La La Land. We have reviews from the annual Cinema Made in Italy; two films: 7 Minutes and At War with Love. The star of the latter is Pif and I am pleased to say that he spent some precious time to speak with me at Cine Lumiere and like most filmmakers he is a movie buff and he was a joy to talk to. Enjoy the read