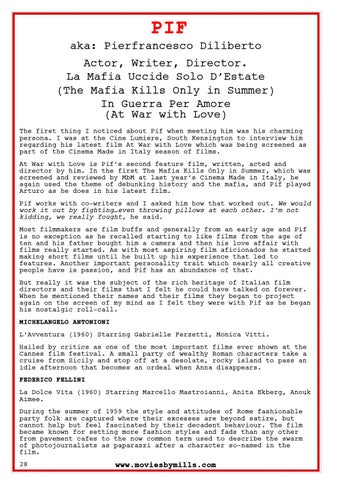 PIF aka: Pierfrancesco Diliberto Actor, Writer, Director. La Mafia Uccide Solo D’Estate (The Mafia Kills Only in Summer) In Guerra Per Amore (At War with Love) The first thing I noticed about Pif when meeting him was his charming persona. I was at the Cine Lumiere, South Kensington to interview him regarding his latest film At War with Love which was being screened as part of the Cinema Made in Italy season of films. At War with Love is Pif’s second feature film, written, acted and director by him. In the first The Mafia Kills Only in Summer, which was screened and reviewed by MbM at last year’s Cinema Made in Italy, he again used the theme of debunking history and the mafia, and Pif played Arturo as he does in his latest film. Pif works with co-writers and I asked him how that worked out. We would work it out by fighting…even throwing pillows at each other. I’m not kidding, we really fought, he said. Most filmmakers are film buffs and generally from an early age and Pif is no exception as he recalled starting to like films from the age of ten and his father bought him a camera and then his love affair with films really started. As with most aspiring film aficionados he started making short films until he built up his experience that led to features. Another important personality trait which nearly all creative people have is passion, and Pif has an abundance of that. But really it was the subject of the rich heritage of Italian film directors and their films that I felt he could have talked on forever. When he mentioned their names and their films they began to project again on the screen of my mind as I felt they were with Pif as he began his nostalgic roll-call. MICHELANGELO ANTONIONI L’Avventura (1960) Starring Gabrielle Ferzetti, Monica Vitti. Hailed by critics as one of the most important films ever shown at the Cannes film festival. A small party of wealthy Roman characters take a cruise from Sicily and stop off at a desolate, rocky island to pass an idle afternoon that becomes an ordeal when Anna disappears. FEDERICO FELLINI La Dolce Vita (1960) Starring Marcello Mastroianni, Anita Ekberg, Anouk Aimee. During the summer of 1959 the style and attitudes of Rome fashionable party folk are captured where their excesses are beyond satire, but cannot help but feel fascinated by their decadent behaviour. The film became known for setting more fashion styles and fads than any other from pavement cafes to the now common term used to describe the swarm of photojournalists as paparazzi after a character so-named in the film. 28