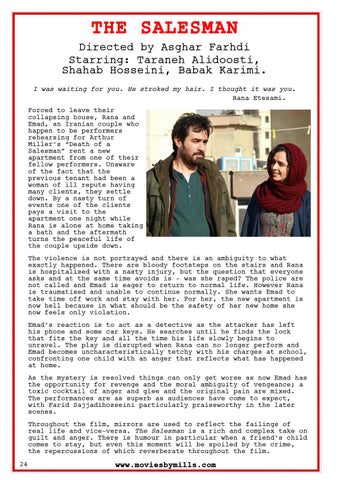 THE SALESMAN Directed by Asghar Farhdi Starring: Taraneh Alidoosti, Shahab Hosseini, Babak Karimi. I was waiting for you. He stroked my hair. I thought it was you. Rana Etesami. Forced to leave their collapsing house, Rana and Emad, an Iranian couple who happen to be performers rehearsing for Arthur Miller’s “Death of a Salesman” rent a new apartment from one of their fellow performers. Unaware of the fact that the previous tenant had been a woman of ill repute having many clients, they settle down. By a nasty turn of events one of the clients pays a visit to the apartment one night while Rana is alone at home taking a bath and the aftermath turns the peaceful life of the couple upside down. The violence is not portrayed and there is an ambiguity to what exactly happened. There are bloody footsteps on the stairs and Rana is hospitalised with a nasty injury, but the question that everyone asks and at the same time avoids is – was she raped? The police are not called and Emad is eager to return to normal life. However Rana is traumatised and unable to continue normally. She wants Emad to take time off work and stay with her. For her, the new apartment is now hell because in what should be the safety of her new home she now feels only violation. Emad’s reaction is to act as a detective as the attacker has left his phone and some car keys. He searches until he finds the lock that fits the key and all the time his life slowly begins to unravel. The play is disrupted when Rana can no longer perform and Emad becomes uncharacteristically tetchy with his charges at school, confronting one child with an anger that reflects what has happened at home. As the mystery is resolved things can only get worse as now Emad has the opportunity for revenge and the moral ambiguity of vengeance; a toxic cocktail of anger and glee and the original pain are mixed. The performances are as superb as audiences have come to expect, with Farid Sajjadihosseini particularly praiseworthy in the later scenes. Throughout the film, mirrors are used to reflect the failings of real life and vice-versa. The Salesman is a rich and complex take on guilt and anger. There is humour in particular when a friend’s child comes to stay, but even this moment will be spoiled by the crime, the repercussions of which reverberate throughout the film. 24