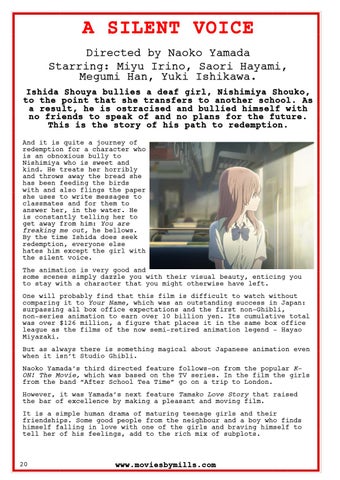 A SILENT VOICE Directed by Naoko Yamada Starring: Miyu Irino, Saori Hayami, Megumi Han, Yuki Ishikawa. Ishida Shouya bullies a deaf girl, Nishimiya Shouko, to the point that she transfers to another school. As a result, he is ostracised and bullied himself with no friends to speak of and no plans for the future. This is the story of his path to redemption. And it is quite a journey of redemption for a character who is an obnoxious bully to Nishimiya who is sweet and kind. He treats her horribly and throws away the bread she has been feeding the birds with and also flings the paper she uses to write messages to classmates and for them to answer her, in the water. He is constantly telling her to get away from him: You are freaking me out, he bellows. By the time Ishida does seek redemption, everyone else hates him except the girl with the silent voice. The animation is very good and some scenes simply dazzle you with their visual beauty, enticing you to stay with a character that you might otherwise have left. One will probably find that this film is difficult to watch without comparing it to Your Name, which was an outstanding success in Japan: surpassing all box office expectations and the first non-Ghibli, non-series animation to earn over 10 billion yen. Its cumulative total was over $126 million, a figure that places it in the same box office league as the films of the now semi-retired animation legend – Hayao Miyazaki. But as always there is something magical about Japanese animation even when it isn’t Studio Ghibli. Naoko Yamada’s third directed feature follows-on from the popular KON! The Movie, which was based on the TV series. In the film the girls from the band “After School Tea Time” go on a trip to London. However, it was Yamada’s next feature Tamako Love Story that raised the bar of excellence by making a pleasant and moving film. It is a simple human drama of maturing teenage girls and their friendships. Some good people from the neighbour and a boy who finds himself falling in love with one of the girls and braving himself to tell her of his feelings, add to the rich mix of subplots.