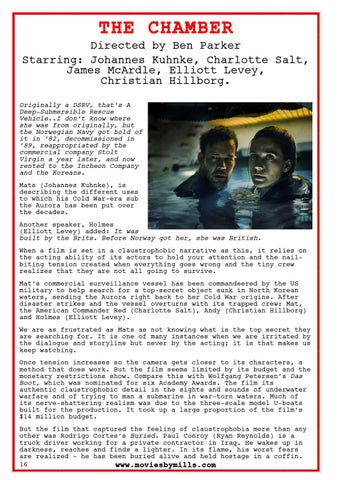 THE CHAMBER Directed by Ben Parker Starring: Johannes Kuhnke, Charlotte Salt, James McArdle, Elliott Levey, Christian Hillborg. Originally a DSRV, that’s A Deep-Submersible Rescue Vehicle..I don’t know where she was from originally, but the Norwegian Navy got hold of it in ’82, decommissioned in ’89, reappropriated by the commercial company Stolt Virgin a year later, and now rented to the Incheon Company and the Koreans. Mats (Johannes Kuhnke), is describing the different uses to which his Cold War-era sub the Aurora has been put over the decades. Another speaker, Holmes (Elliott Levey) added: It was built by the Brits. Before Norway got her, she was British. When a film is set in a claustrophobic narrative as this, it relies on the acting ability of its actors to hold your attention and the nailbiting tension created when everything goes wrong and the tiny crew realizes that they are not all going to survive. Mat’s commercial surveillance vessel has been commandeered by the US military to help search for a top-secret object sunk in North Korean waters, sending the Aurora right back to her Cold War origins. After disaster strikes and the vessel overturns with its trapped crew: Mat, the American Commander Red (Charlotte Salt), Andy (Christian Hillborg) and Holmes (Elliott Levey). We are as frustrated as Mats as not knowing what is the top secret they are searching for. It is one of many instances when we are irritated by the dialogue and storyline but never by the acting; it is that makes us keep watching. Once tension increases so the camera gets closer to its characters, a method that does work. But the film seems limited by its budget and the monetary restrictions show. Compare this with Wolfgang Petersen’s Das Boot, which was nominated for six Academy Awards. The film its authentic claustrophobic detail in the sights and sounds of underwater warfare and of trying to man a submarine in war-torn waters. Much of its nerve-shattering realism was due to the three-scale model U-boats built for the production. It took up a large proportion of the film’s $14 million budget. But the film that captured the feeling of claustrophobia more than any other was Rodrigo Cortes’s Buried. Paul Conroy (Ryan Reynolds) is a truck driver working for a private contractor in Iraq. He wakes up in darkness, reaches and finds a lighter. In its flame, his worst fears are realized – he has been buried alive and held hostage in a coffin. 16 www.moviesbymills.com