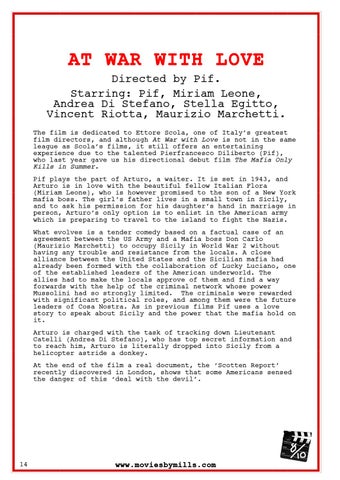 AT WAR WITH LOVE Directed by Pif. Starring: Pif, Miriam Leone, Andrea Di Stefano, Stella Egitto, Vincent Riotta, Maurizio Marchetti. The film is dedicated to Ettore Scola, one of Italy’s greatest film directors, and although At War with Love is not in the same league as Scola’s films, it still offers an entertaining experience due to the talented Pierfrancesco Diliberto (Pif), who last year gave us his directional debut film The Mafia Only Kills in Summer. Pif plays the part of Arturo, a waiter. It is set in 1943, and Arturo is in love with the beautiful fellow Italian Flora (Miriam Leone), who is however promised to the son of a New York mafia boss. The girl’s father lives in a small town in Sicily, and to ask his permission for his daughter’s hand in marriage in person, Arturo’s only option is to enlist in the American army which is preparing to travel to the island to fight the Nazis. What evolves is a tender comedy based on a factual case of an agreement between the US Army and a Mafia boss Don Carlo (Maurizio Marchetti) to occupy Sicily in World War 2 without having any trouble and resistance from the locals. A close alliance between the United States and the Sicilian mafia had already been formed with the collaboration of Lucky Luciano, one of the established leaders of the American underworld. The allies had to make the locals approve of them and find a way forwards with the help of the criminal network whose power Mussolini had so strongly limited. The criminals were rewarded with significant political roles, and among them were the future leaders of Cosa Nostra. As in previous films Pif uses a love story to speak about Sicily and the power that the mafia hold on it. Arturo is charged with the task of tracking down Lieutenant Catelli (Andrea Di Stefano), who has top secret information and to reach him, Arturo is literally dropped into Sicily from a helicopter astride a donkey. At the end of the film a real document, the ‘Scotten Report’ recently discovered in London, shows that some Americans sensed the danger of this ‘deal with the devil’.