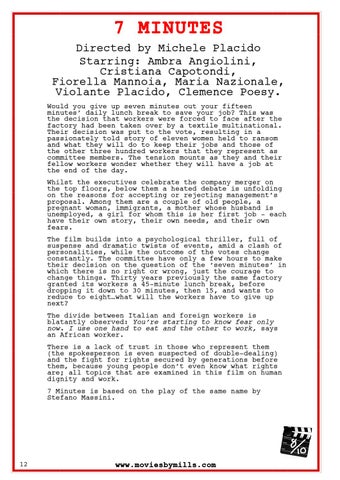 7 MINUTES Directed by Michele Placido Starring: Ambra Angiolini, Cristiana Capotondi, Fiorella Mannoia, Maria Nazionale, Violante Placido, Clemence Poesy. Would you give up seven minutes out your fifteen minutes’ daily lunch break to save your job? This was the decision that workers were forced to face after the factory had been taken over by a textile multinational. Their decision was put to the vote, resulting in a passionately told story of eleven women held to ransom and what they will do to keep their jobs and those of the other three hundred workers that they represent as committee members. The tension mounts as they and their fellow workers wonder whether they will have a job at the end of the day. Whilst the executives celebrate the company merger on the top floors, below them a heated debate is unfolding on the reasons for accepting or rejecting management’s proposal. Among them are a couple of old people, a pregnant woman, immigrants, a mother whose husband is unemployed, a girl for whom this is her first job – each have their own story, their own needs, and their own fears. The film builds into a psychological thriller, full of suspense and dramatic twists of events, amid a clash of personalities, while the outcome of the votes change constantly. The committee have only a few hours to make their decision on the question of the ‘seven minutes’ in which there is no right or wrong, just the courage to change things. Thirty years previously the same factory granted its workers a 45-minute lunch break, before dropping it down to 30 minutes, then 15, and wants to reduce to eight…what will the workers have to give up next? The divide between Italian and foreign workers is blatantly observed: You’re starting to know fear only now. I use one hand to eat and the other to work, says an African worker. There is a lack of trust in those who represent them (the spokesperson is even suspected of double-dealing) and the fight for rights secured by generations before them, because young people don’t even know what rights are; all topics that are examined in this film on human dignity and work. 7 Minutes is based on the play of the same name by Stefano Massini.